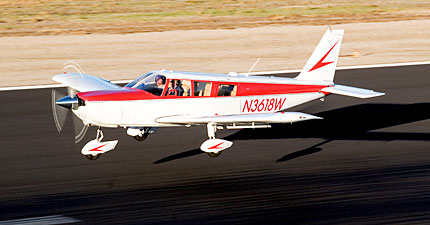 On any given flight, the landing is the maneuver that concerns pilots the most. It concerns the pilot because, when it comes to aircraft handling, the takeoff is pretty simple, and once in the air, controlling the aircraft is far less complicated than driving a car in traffic. Nevertheless, at the end of every flight is the dreaded landing. Every professional pilot has found his or her techniques for a smooth landing. A perfect landing every time under all ground and wind conditions isn’t easily obtainable or necessary for a safe flight.

The almost universally accepted tricycle-gear aircraft have the two main wheels attached to the airplane (a short distance aft of the CG) and a nosewheel under the nose of the aircraft. Taking off and landing tricycle aircraft using hard-top runways are far easier than grass runways. But why is that, and why aren’t they prone to groundloops like taildraggers? The reason is the location of the main landing gear in relation to the location of the CG. Anyone who has ever taken gymnastics or competitive diving knows that the rest of your body will follow where you move your head. That’s because your head is the heaviest mass on your body. Substitute the fuselage of your airplane for your head and you’ll see that when the nose of the aircraft moves off the centerline, the rest of the aircraft, which is behind the CG, will follow. Because it’s located behind the CG, the fuselage will rotate behind the wheels, resulting in a groundloop. Tricycle aircraft have the heaviest part of the aircraft in front of the CG so the fuselage resists pivoting. Also, taildraggers sit on the runway with a positive angle of attack and tend to rise into the air because of gusts or excess landing speed. Most tricycle-gear aircraft at rest can have a neutral or negative angle of attack and tend to remain on the ground while moving on their three wheels.

All of the most popular modern GA aircraft are tricycle-gear, and many of the newest designs are also nonretractable, with the exception of Mooney and Beechcraft. So let’s talk about the planes that you probably fly. These aircraft are divided into high wings and low wings, most with tricycle gear. Low-wing aircraft usually land easier because of the cushioning compressed air of ground effect—because of the wings’ close proximity to the ground. High-wing aircraft also have some ground effect but not as much as low-wings do. Low-wing Pipers are easy to land also because of a good dihedral angle, strong ground effect, plus hydraulic landing-gear struts set far apart. Cessnas use the patented Land-O-Matic landing-gear system with tapered steel-tube landing-gear legs.

For landing in strong crosswinds, it’s suggested that you use minimum or no flap deflection. And fully deploying Cessna-type flaps will most likely make a go-around difficult during those first few moments after powering up since the nose will want to rise dramatically.

Most aircraft will benefit from proper use of flaps during landings. Keep the nose over the centerline and start your flare as you near the pavement, keeping that nose up until rubber meets runway. Don’t relax your attention until the aircraft is stopped on the ramp. Heavier aircraft may need increased force to raise the nose, so be prepared to use trim to ease your workload

But what qualifies as a squeaker? An aircraft shouldn’t touch the wheels to the ground until it’s no longer flying. When the horns, whistles and croakers are sounding, the plane should be only inches, or at most a foot or two, off the runway. With power at idle, the plane will eventually stall and stop flying. Because the plane still has about 40 to 50 knots of forward speed, the wheels start to spin and you have a greaser.

Advertisement
10 Ways To Improve Your Landings
1. A runway is a runway. Don’t establish turn points for entering, downwind to base or base to final by objects on the ground—use your position in relation to the runway. And learn to judge your distance and height above the runway.

2. Have benchmark pattern speeds for downwind, base, final and short final, but be flexible and know how to modify them when necessary for weather conditions and varying aircraft weights.

3. The majority of landing accidents are caused by either being too high or too low on final. Combine that with the wrong speed on final for the conditions, and a landing can be difficult and even unsafe. Always pick a spot and try for a spot landing.

4. The preferred pattern should place your aircraft at a distance and height where, if you experience power failure, you can still land on the runway.

6. Make every landing as if you were flying a taildragger—control your drift. If applicable to your plane, stall it on at the slowest possible speed. Current instructors teaching in high-performance aircraft, such as the Cirrus and Columbia, and in light twins now give lessons on “landing attitude” (see number 8).

7. If something about your approach feels wrong, abort, go around and set up again.

8. Your plane isn’t a car. Don’t drive it onto the runway. The accepted method for landing heavier aircraft is landing attitude. The nose is positioned in a positive angle of attack, and this angle of descent is held by using power to maintain the correct altitude—if the plane goes below the glidepath, power up; if it goes above, power back.

9. If conditions permit, hold the nosewheel off the runway as long as you can. This attitude helps slow the plane down without brakes and minimizes wear on the nosegear, tire and wheel.

10. Don’t just know the theory of crosswind, short-field and soft-field landings; practice them under controlled conditions or with an instructor. They’re fun and will increase your landing ability.

Landings can be fun when done properly. Practice approaches and landings at various types of airports, but include some controlled fields to stay current with tower practices. Keep in mind that though a perfect and safe landing should be your goal, it’s not always easily otainable. If you continue making the same types of landing errors, fly with an instructor who can help solve any problems you may be experiencing. Above all else, remember that flying—and, yes, even landings—should be fun.