Why would anyone want to become an airline pilot? It’s a great question. There are many ways to be involved in aviation, but the short answer for me is that it’s a great career. It is, in fact, a job I still enjoy doing 27 years later at Brand X Airlines. Even with the challenges my company and the industry as a whole have endured over the decades, I still look forward to putting my uniform on and going flying. The pay is very good, and the schedule is decent. But the biggest draw is that I still love what I do.

How It Happened For Me

I didn’t know I was going to become an airline pilot. As a fourth-grader in the 1970s living in Anchorage, Alaska, near a neighborhood grass strip (Flying Crown Airport), I got completely obsessed with airplanes, and my initial goal was to become a bush pilot and live in a cabin by myself in the woods of Alaska. Peace out, civilized folk! But after our family moved a few more times and I started looking at flying as a teenager, I decided the Air Force was the way to go.

My introverted Grizzly Adams script shifted to dreams of “Top Gun.” When I went through Air Force pilot training in 1985 to 1986, there was no path for me to the “danger zone,” so I ended up flying Learjets (the C-21A) and then the venerable C-141B (the beloved Starlifter). As a transport pilot, I discovered that this type of flying offered fun, challenge and travel. It provided me the insight into myself that I actually dig working with a crew and that I enjoy flying people and boxes around the world.

After my Air Force commitment was up, I immediately pursued airline flying and got on with a major legacy airline. From day one, I knew I was where I wanted to be. I enjoyed flying people around, having a set schedule and decent pay, and, best of all, when I came home from a trip, I left work behind and could forget about it until it was time to fly again.

Yes and no. For the sake of safety, I’m grateful that the airline industry made our job as routine as possible (with standardized operating procedures, cockpit resource management training and more) because there are plenty of other challenges flying day in and day out.

Within the airline itself, there are opportunities for pilots to do things beyond “flying the line.” Some pursue a management route within the airline at our training center, becoming chief pilots at our various domiciles or management pilots at our corporate headquarters. Others pursue special projects and instruction and evaluation positions. With so many new technological advances in the cockpit and within the air traffic control architecture, the airline relies upon the expertise of its pilots to help craft training programs to address those advances and standardize how to implement changes safely.

Outside the airline, many folks have pursued advanced degrees, started or maintained outside business and investment interests, or continued their military service in the National Guard or Reserves. I have done all of the above, from serving in the Air Force Reserves to becoming an instructor in our training center to having a small business as an engineering tech writer to becoming a line check airman. All doable paths as an airline pilot.

Lastly, other pilots simply fly their trips and happily do their own thing on their days off. Many friends use their time off to travel on their benefits, pursue their favorite charity, fly WW2 aircraft with the Commemorative Air Force. You name it!

Airline flying offers excellent bang for the buck on job satisfaction, schedule and pay as compared to other commercial flying jobs out there. No job is perfect, and my fair airline has seen its share of woe, but after almost 27 years here, I wouldn’t trade a day of it to be anywhere else!

Per the rules, you can’t fly past the age of 65 as a Part 121 pilot. However, airlines around the country are hiring older folks (I have flown with new hires who were 58 and 59 years old). So put down that walker and get your ratings, post-haste! Not saying it’s easy, but becoming an airline pilot could be the best midlife crisis decision you ever made—just saying.

I Don’t Have Enough Money To Fly!

The biggest nut to crack in the industry is the financial barrier between folks wanting to fly and how they pay for it. The major airlines still look for applicants with a four-year college degree. Fair or not, that’s the way it is. There is, however, one “easy” way to attain both ratings and get a four-year degree for free. And that way, friends, is the military.

If you’re in high school looking to fly but you don’t have the money for school or flying lessons (the situation I was in), do everything you can to get into a military academy. Honestly, if you can make it through a military academy (doesn’t matter which one), you can look forward to many doors opening for you in life, in general. My specific advice on is that if you graduate from West Point but think you may want a fixed-wing jet airline career in the future, cross-commissioning into the Air Force or the Navy with the intention of becoming a pilot in one of those services is the best way to go.

I know that may be a controversial opinion, but it’s a tall order to transition yourself easily from a long career in props or helicopters to jets. If a military academy isn’t an option, pursue an ROTC scholarship. Again, seek a commission into the Air Force or Navy if you want to fly jets.

Lastly, if none of these options are available but you want to go the military route, enlist! Quite a few friends of mine enlisted in the armed services, used their GI benefits to get their four-year college degree while they were still in, attained their commissions as second lieutenants, and promptly went to pilot training.

The civilian route is tougher. But there are ways to do it beyond simply shelling out $80,000 to a flight school.

Quite a few airline pilots started as flight attendants and flew on the side. Others worked as engineers, accountants, teachers, etc., took up flying as a hobby, and then decided to keep working to pay for their ratings needed to apply to their first commercial flying job. Some of my colleagues in this category told me that to make ends meet and still fly, they got roommates or lived with family and friends. This is probably one of the toughest routes out there but doable. Other pilots told me that their path included patched-together co-signed student loans and funding the rest through the various and numerous aviation scholarships.

Becoming a flight instructor to build hours while earning a salary seems to be another common path. If you can scrimp, save and blood-sweat-and-tears your way to a CFI, you can build hours quickly. Flying seven or eight hours a day instructing at a large flight school, for example, will fatten your logbook, fast. Flight schools often offer their employee CFIs reduced rates on their own personal flying and attainment of advanced ratings. There are actually quite a few folks who have decided to change careers midlife and get their hours this way to eventually move on to the airlines.

Airlines and flight schools are getting more inventive at offering scholarships and pathway programs to professional flying. At Metro State University in Denver, Colorado, for instance, Envoy offers a Pilot Pipeline Program. An MSU student can interview with Envoy in order to secure a position (ultimately) with American Airlines. The upshot is that, if accepted into this pipeline program, a student gets reimbursed for some expenses related to attaining one’s ratings, plus a $10,000 scholarship contingent on a two-year employment contract with Envoy Air, with a “flow-through” agreement to American Airlines after the two- year commitment is met. Other universities with strong aviation and aerospace sciences departments offer the same or similar opportunities.

Numerous scholarships are offered by individual aviation organizations, such as AOPA, EAA, Women in Aviation and ALPA. The best advice is to contact a flight school and discuss all of these options. Academic advisors at colleges are also great resources to obtain financial help or scholarships. Google is your friend! Join AOPA and EAA and any other aviation organization or club, and you’re bound to discover that they offer money for flying. Well worth your time, plus networking and finding a mentor in one of these organizations will help you in the long run when it comes time to interview.

There are many ways to get to the coveted front seat of an airliner. Some are easier than others, but among the friends and coworkers I’ve interviewed for this article, all of them told me the same thing: It was worth it. It wasn’t always perfect, but it was worth it. It is worth it. 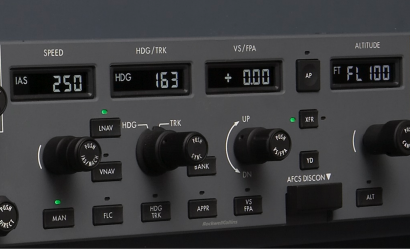