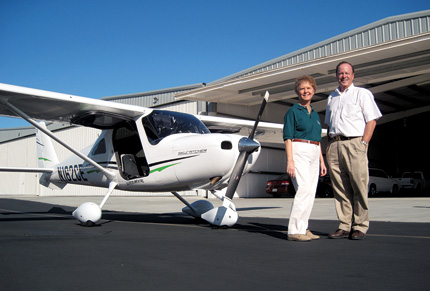 So what are they like in person?” is the first question my pilot friends ask when I tell them I’ve spent a day with John and Martha King, the well-known founders of King Schools. “Are they as nice as they appear?” It seems everybody in aviation knows the Kings, and they should: One out of every two pilots has taken one of the 90+ King courses, ranging from private pilot to jet training, and beyond.

I wasn’t sure what to expect as P&P Editor Jessica Ambats and I made our way south to San Diego’s Montgomery Field, where King Schools is based. I was doubly excited that I’d be meeting John and Martha King for the first time and spending the day with them as they produced Cessna’s brand-new online course, flying the first production 162 Skycatcher. Also, I was curious about the improvements Cessna had made as a result of some well-publicized problems, and I wanted to find out what the Kings genuinely thought about the Skycatcher.

Both John and Martha agree that the Skycatcher is something special. “It’s the biggest thing in GA in 60 years,” says John. “I think it’s going to revolutionize flight training.” He points to the unique characteristics of the 162, commenting on its simplicity and crisp responsiveness. “I got used to it in five minutes!” he notes. Martha says the 162 is fingertip-easy to fly and is extremely docile. “It’s the ideal trainer,” she adds. Both Kings talk about things like ease of entry with the gull-wing door design, and the incredible visibility.

Accidental Success
King Schools’ reach is international, with nearly three million courses sold in the last 35 years. “We’re in the business of education,” says John, “and our mission is to make flying clear, simple and fun.” The Kings produce DVD and web-based training courses designed to teach everything pilots need to obtain a certain rating or certificate. The courses have an earnest, “folksy” quality, and have been so successful that many pilots consider the Kings their personal mentors.

“We never intended to make this a business,” notes John. “We were just looking for a serious way to make a living.” After meeting at Indiana University, John and Martha married and started a truck lubrication business. The Arab oil embargo in 1973 led them to look for ways to supplement their dwindling income. Both were involved with flying by then, and they decided to teach at local ground schools on weekends. The demand for their ground school course soon became more than they could handle.

The Kings made a videotape of one of their ground school sessions so they could critique themselves. Because they couldn’t be in two places at once, John and Martha used the videotape to teach the course in locations where they couldn’t appear. That led to the founding of King Schools. “We’re still looking for a serious business,” laughs John.

The Kings & The Skycatcher
The reputation King courses have around the world is of high quality and fun delivery, and that fact was not lost on Cessna. It selected King Schools to produce a full-spectrum private and sport pilot ground school course, and provided the 162 Skycatcher as the trainer for it. The final product will be used at Cessna Pilot Centers. The day we visited, Martha was getting ready to film a new segment for the course. While she went through the extensive preparations for filming, we got a chance to look over the Skycatcher.

I hadn’t been a fan of the prototype in its purple paint scheme; to me, it had looked just “okay” when I had seen it up close at aviation events. But here, in its gleaming white production paint scheme, with contrasting striping, it looked positively fun. In the hangar, the 162 looked jaunty and strong. It reminded me of a puppy approaching its mature stage—all leggy and stout. It made you want to sit in it.
Advertisement

“This airplane is pure fun,” exclaimed John, giving us the nickel tour of the 162. “It’s responsive, it goes exactly where you put it, it’s a breeze to land, and the visibility is fantastic—almost like a helicopter.” Incidentally, John King has a certain way of talking. He speaks in the practiced cadence of a good announcer. It’s something he does on camera or off, with his wife, with friends or with strangers. His speech has a beat to it, a singsong quality, and he punctuates his sentences with it. “It’s…just…puuuure…fun,” says John. 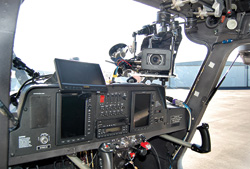 I ask John about the spin accidents involving the Skycatcher. Two 162s have crashed: the first one was a total loss, and the second aircraft deployed the ballistic parachute and was dragged along the ground, inverted. That’s the aircraft that’s sitting before us—repaired and modified. Both crashes were due to unrecoverable spins.

“I’m absolutely happy that this happened,” says John matter-of-factly. “Cessna is testing this airplane far beyond what ASTM standards specify. The fact that it found a condition on the far outside corner of the performance envelope that was unrecoverable in this airplane means that neither I nor some unsuspecting student will inadvertently find that condition.” John explains that LSA don’t require the level of testing to which Cessna is subjecting the 162. “But it’s how Cessna will make sure it’s a safe and reliable airplane.”

Cessna modified the Skycatcher to prevent the condition that caused the unrecoverable spin. The vertical stabilizer and rudder were extended lower, and a small fin was added longitudinally below the tailcone along the rear bottom fuselage. Aileron travel was limited, and the differential was increased; the “down” aileron sticks out into the slipstream less than the “up” aileron in a bank. The problem appears to be fixed, and both John and Martha exude absolute confidence in the airplane. “It flies just beautifully,” adds John.

Flying The Video
Prior to my visit with the Kings, I thought the job of creating an aviation course was a matter of holding a video camera in the airplane while the pilot talked to the audience, explaining each maneuver or teaching point. After seeing how it’s done, I’ll never look at another King course in quite the same way.

The camera setup in the airplane consisted of a large HD video camera mounted with enough legs, arms and knobs to look like a mechanized robot from a dark, industrial future. Add a teleprompter directly in front of the pilot (who’s also the narrator), various audio feeds to capture radio communications, a laptop to view footage and lighting, and the camera operator, and you’ve got a video production studio in a two-seat trainer.

The pilot—today it will be Martha, though she and John take turns being on camera—has to perform all the tasks required in the course while actually flying the airplane. She’ll be filming a segment on radio communications. Visibility is limited by the huge camera setup, and the pilot must read the lines from the teleprompter while doing everything else. Frankly, it looks like brain overload. Sitting in the Skycatcher with all the video gear around me, I developed a new respect for what John and Martha do. 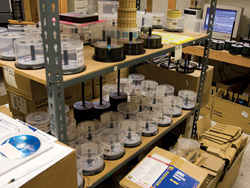 Martha emerges from the hangar and straps herself into the Skycatcher. Its ingenious stick arrangement feels as though it’s connected to the floor, but the stick control actually pivots through the panel, giving the 162 lots of legroom and making it easy to get in and out. Martha has been busy going over the lines of dialogue for this segment. A production team produces the script, and then Martha “Martha-izes” it so it sounds natural and fits her delivery. In all, it takes some 60 people to produce a King Schools course.
Advertisement

The gaping gull-wing doors offer a wide-angle view of Martha’s preflight cockpit gyrations. I notice that nothing distracts her from the checklist tasks. Her practiced, calm precision comes from years of flying everything imaginable. In fact, John and Martha King are the only couple to hold certificates in every FAA category and class rating available.

Martha and the Skycatcher go out for an hour of flying/filming segments. We watch from the ground as she makes repeated takeoff, landing and taxi runs for the camera. Now and then, the tower uses nonstandard verbiage, necessitating a retake. The tower has no script. “Sometimes I have to ask them things in a certain way to coax the right phraseology out of them,” Martha explains. “Today, I needed them to give me a certain taxi instruction for the video.” She emerges tired but smiling after a long afternoon in the cockpit. She’s exacting about her flying. “Safety comes first,” she says. Though she has a determined focus about her, her warm smile softens her edge.

Hangar Flying
We finish the afternoon by relaxing in picnic chairs inside the large hangar. The Skycatcher cools down next to us as everyone unwinds after a long day of filming and flying. With all the accolades and awards she and John have earned over the decades, I’m curious about Martha’s proudest flying accomplishment. “Flying our Falcon 10 through Russia,” she answers thoughtfully. “That was just an incredible experience.” Another proud moment was being named one of the “100 Distinguished Aviation Heroes in the first century of flight” by the First Flight Centennial Commission at Kitty Hawk. There, she was in the company of Chuck Yeager, Neil Armstrong and John Glenn. “That was very moving,” she relates. “Quite an honor to be with those giants of aviation.”

Both answer that their greatest professional accomplishment is knowing that they’ve helped hundreds of thousands of pilots to fly. “We talk to pilots all the time, and they tell us we’ve helped them,” says John. “That’s incredibly rewarding. We never get tired of that.”

John tells me how Martha first approached aviation as something to conquer, a task to master. “But on her solo cross-country, she got delayed. She ended up coming back when it got dark,” says John. “We saw her approaching, and worried that she would be nervous because it was night and she was alone.” John tells us she made a perfect landing, rolled to a stop and stepped onto the wing. “That was an amazing experience,” declared a smiling Martha. John recalls the moment, “That was the instant I think she fell in love with flying.”

Next to us, the Skycatcher looks bright against the afternoon sun. The airplane is so well known that the Kings can’t take it to airports and just park it on the ramp; it’s like driving around with a movie star. So they fly the Skycatcher somewhat incognito. “If we had a choice of flying just about any GA airplane on a cross-country, we’d pick the Skycatcher,” declares John. Just then, a couple walks in from the ramp to view the Skycatcher. “Wow,” they both exclaim almost in unison, “it sure looks fun!” The Kings smile.