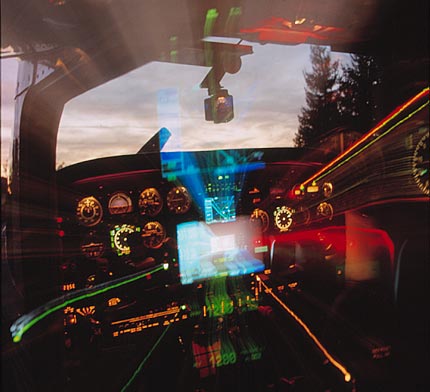 Learning to use even one of the modern IFR-approved GPS maps, let alone several of them, is challenging. Understanding the capabilities of a device requires as much class time as learning how to operate it. The how can be very different from unit to unit, but the what is surprisingly similar. And it’s hard to learn how to do something if you don’t know exactly what it does. In this two-part article, we’ll use the Bendix/King KLN94, Garmin Apollo CNX80, and 430 or 530 as representatives of the class of devices to help you figure them out.

Many of the things these units do are easily understood, even if they might be complicated to execute. You can make checklists, do flight-planning and fuel-planning, perform density-altitude calculations, set up Vnav operations, change map setup items, set timers, predict RAIM, etc. We’ll focus instead on capabilities that are understood in principle, but turn out to be more subtle or complex when you try to use them. For example, how many different ways can you use the Direct-To operation? What does it mean to activate an approach (there’s no Activate Approach option in the KLN94 or CNX80)? Where are arrivals and approaches added into your flight plan (after your destination in the 430 or 530, just before it in the CNX80 and KLN94), and what does Activate Leg mean? Let’s explore the major capabilities of these GPS devices in some depth.

Flight Plans
Flight-plan operations are the meat and potatoes of these devices. For VFR use, a flight plan is just a list of waypoints you string together from your starting point to your destination. After you’ve activated it or made any changes, you should review it by scrolling through the active flight-plan list. The course between two adjacent waypoints defines one kind of flight leg (there are many kinds when procedures are added), and has a desired track and specific location on your map. The CNX80 has advanced features common to flight management systems and abilities to add airway segments to flight plans and, with its WAAS (Wide Area Augmentation System) capability, it’s certified for primary navigation under TSO-C146 (not secondary, like the TSO-C129 KLN94, and 430 or 530 systems).

The leg line is directional, always a Course-To (unlike To-From radials of a VOR). If you’re off course, the autopilot would take you to the active leg, then fly toward the next waypoint. The leg that is currently active is shown in magenta, with the others in white, and isn’t necessarily the one you’re on now (or near). You can choose to make any leg active (except in the KLN94), but by default, the one nearest to you will be selected when you activate the flight plan. If you’re within 5 nm of the departing airport, the CNX80 will automatically make the first leg active. Sometimes, however, it will declare “no active leg,” so you’ll have to choose one.

There are times (especially for IFR flight plans) when you want to activate a particular flight leg, not necessarily the one nearest to you. To “jump ahead” in the leg sequence choose Activate Leg in the 430 or 530s or Fly Leg in the CNX80. The KLN94 always selects the nearest leg when the flight plan is modified, so to jump ahead to a new waypoint in your list, you may have to use the Direct-To operation.

Advertisement
Since it helps to organize the recall of data from the unit, there are advantages in creating a more extensive flight plan rather than going direct. The databases are alphabetical, but can be categorized by all the nearest things (waypoints, airspaces, centers, FSS stations) or by your flight-plan waypoints. So, if you name a departure airport, rather than go direct to your destination, and include airports along the way, you can quickly find frequencies and other information about them. Also, the active flight-plan page and your map data fields will show selectable info on each waypoint, like distance, ETE or desired track. If you don’t really want to fly that zigzag route, go Direct-To your destination within the flight plan. This won’t change your flight-plan list, so you can still call up information on each waypoint quickly.

You may want to include user waypoints in your flight plan. If you’ve flown out of the Seattle area with its many TFRs, you may have been given a clearance to some lat/long point to miss them, then gone direct to your first waypoint. You can do that by making a user waypoint at that lat/long and putting it into your flight plan.

User waypoints can be created in several ways. Just push the cursor while you’re on the map page and select ENT (on the 430 or 530) or MRK (on the CNX80) to make a waypoint at your present position (enter it again to confirm it). On the KLN94, press Enter twice while on the Nav2 present position page. Later, you can go to the user waypoint list and edit the default name to one you choose. You also can make a user waypoint defined either by its lat/long coordinates or its radial and distance from any waypoint in the database.

Making a judicious string of waypoints en route to your home airport can be useful later if you come home in low visibility and marginal VFR situations. In airspace-rich areas like Los Angeles, this is a good way to thread your way around the basin.

Direct-To Operations
Many pilots use Direct-To for a quick and easy flight plan. If you have a more extended flight-plan list, you can still use the Direct-To operation. If you opt for a Direct-To waypoint off of the plan, your map will show the new flight-plan course as a magenta line to that waypoint. Your active flight-plan list is unchanged, however, and its waypoints (but not the legs) may still be shown on the map. If you later eliminate the Direct-To operation, your former flight plan is still active. To eliminate a Direct-To operation, you can cancel it in the KLN94, or 430 or 530, or just activate a leg in your flight plan in the CNX80. The 430 or 530 elimination trick is to push Direct, Menu and Enter (the DME acronym trick). For the Bendix/King, push Direct, Clear, Enter. Using Direct-To within your flight plan also is a useful tool. It takes you directly from the present position to a selected waypoint in the plan and leaves the list alone.

The Garmin 430 or 530, and CNX80 do a lot more. On the 430 or 530 Direct-To page, you can choose any waypoint in the database or select one from your flight-plan list or nearest waypoints and then choose your course to that waypoint in the CRS box (the default choice is direct from the present position).

The CNX80 does all that and more. Pushing the Direct key brings up a set of soft keys, labeled Direct, Hold, Dest, FlyLeg, CrsTo, CrsFr and OBS. This is where you activate specific legs (here, the one ending in GMN, which has the cursor on it) or go to or from a waypoint on a specified course. With the KLN94, you can specify the OBS course numerically only if the unit is not switched to your CDI.

Advertisement
Leg Sequencing
If you haven’t added any procedures into your flight plan, the unit will automatically sequence from one leg to the next right to your destination and will provide error information to drive the autopilot in NAV mode as well. Unless you have a GPS or use Sandel’s SN3308 “glass HSI” in the AutoSlave mode, you’ll have to change the OBS setting on your CDI to the new desired track at each waypoint. For course correction, many autopilots look at both the cross-track error from your active leg and the difference between the GPS desired track and OBS setting on your CDI or HSI.

If you push the OBS key (on the KLN94, and 430 or 530) or the Direct and OBS keys (on the CNX80), the next waypoint then behaves like a VOR. You dial in a Course-To with the OBS needle on your CDI and your flight-plan line on the map will pivot about the next waypoint to align with that course. With OBS selected, the leg sequencing is stopped. Using Direct-To on a course does the same thing, but doesn’t suspend leg sequencing. One example of flying a different course to your next waypoint is (after takeoff) to join a nearby airway that goes through that waypoint.

Stay Tuned For Part Two
The addition of departures, arrivals, approaches and flying airways adds sufficient complication to a flight plan as to require a good understanding of the capabilities described here. In part two of this article, we’ll see how the Direct-To and Activate Leg tools become critical in manipulating IFR flight-plan legs so that your flight plan and ATC directions don’t conflict. We’ll also describe how procedures are added into a flight plan you create, and what problems that can cause you, often at busy and critical times.