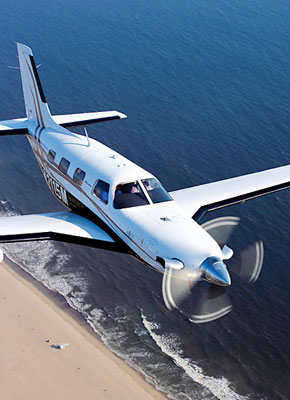 The newer generation of pilots may not remember that Piper had a proud tradition of building turboprops long before the advent of the company’s current flagship, the Meridian. As far back as the mid-1970s, Piper was selling Cheyennes, and true Piper trivia buffs like to remind us that the company also built a turboprop version of the P-51 Mustang called the Enforcer. Piper attempted to market the fire-breathing Enforcer to U.S. and foreign governments as an economical, military ground-pounder. (The Enforcer mounted a whopping 2,455 shp Lycoming turbine out front and could carry a range of ordinance.)

Today, New Piper’s lone turboprop entry is the single-engine Meridian, a design based on the Mirage and thus the Malibu. In 2001, the Meridian joined SOCATA’s TBM 700, the Pilatus PC-12 and Cessna’s Caravan to bring the production, single-engine turboprop field to four models. Primarily designed as an entry-level turbine for Piper owners stepping up from the Mirage, the Meridian was intended to bring the talents of turboprops to a new stratum of general aviation pilots.

Bart Jones, Piper’s chief pilot and the primary test pilot on the Meridian from conception to certification, says the resemblance between the piston-powered Mirage and the turbine Meridian is certainly more than coincidental, but the two airplanes are more different from each other than they look.

“This really is a very different airplane from the Mirage,” says Jones. “In fact, it turned out to be a far bigger engineering challenge than we envisioned when we launched the turboprop upgrade in 1998.”

Examine a new Mirage and Meridian side by side on the ramp, and you begin to notice some of the differences. The most obvious is the Pratt & Whitney engine. Turbines are considerably lighter and deliver far greater horsepower than piston mills, and that means they must be mounted farther forward to preserve the CG. In the Meridian’s case, that translates to just under a foot more fuselage than the Mirage. Cabin dimensions remain unchanged, with six seats and baggage storage both in front of and at aft cabin.

One big change, however, is the instrument panel. The Meridian now comes with the comprehensive Avidyne FlightMax Entegra glass panel featuring three 10.4-inch displays, a standard Garmin 330 TIS uplink transponder, dual Garmin 430s, STEC Magic 1500 autopilot, weather radar and everything else you might need for communication, navigation and aircraft control. Inevitably, some pilots will want even more capability, and the demo airplane was equipped to the max: Stormscope, XM Satellite uplink and Avidyne’s Narrowcast system, which allows aircraft tracking and two-way messaging, plus a second transponder and CMax Electronic Approach charts.

Advertisement
The Meridian continues to reflect the design philosophy of Jim Griswold, the aeronautical engineer who led the team that conceived the original Malibu 20 years ago. Cabin room is generous, but there’s no unnecessary wetted area aft of the rear seats. Griswold used Boeing’s practical approach as his guide.

“Airframe weight is critical in airliners. When you’ve enclosed the passengers and baggage,” he told me, “you stop trying to create a work of art and stick on the tail. You don’t taper the aft empennage, and you minimize weight and drag by keeping the fuselage as short as possible.”

The Meridian’s wings employ the same high-aspect-ratio airfoil as the Mirage, but they feature a tapered leading-edge root section designed to improve lift at high altitude and help the airplane meet the 61-knot stall rule. The result is slightly more wing area and a reduced wing loading. A proliferation of vortex generators are standard equipment, bonded to the wing’s upper leading edge and the tail’s lower surface. The conventional horizontal tail (no stabilator here) is 37% larger in area, as well. The result is better lift at high altitude, important for turbines that must operate in the flight levels on practically every flight to optimize speed and range.

One of the great joys of turbine-powered aircraft, be they prop or jet, is that once you have the engine(s) running, there’s little left to do but fly. Speeds are definitely higher, and it’s important to adjust your brain to stay ahead of the airplane, but systems are actually simpler than on a typical piston model. The Meridian is very much a checklist machine, but if you’ve succeeded in getting the engine started, pretakeoff checks are similar to the old CIGARSR/LCA, except that you can pretty much forget the first “R” for “run-up.” Drop 10 degrees of flaps, ease the left lever to about 1,250 pounds of torque and hang on. As the airplane accelerates to liftoff speed, power will rise to the 1,330-pound limit.

With 500 shp on tap from the PT6A-42A, the Meridian comes off the ground cleanly at 80 knots and starts uphill aggressively. Clean up the underwing, hold 110 knots, and you’ll see an easy 1,500-fpm climb at gross, more like 2,000 fpm flying with full fuel and only two pilots up front. As mentioned above, torque limit is 1,330 pounds, and if you keep pushing and maintain that power as you climb, torque will begin to fall below the maximum at about 20,000 feet. In ISA conditions, plan on reaching 18,000 feet in 15 minutes and 25,000 feet in just under a half hour. The PA-46T isn’t certified for reduced vertical separation minimum (RVSM) operation, so the airplane is limited to FL280 and below. During certain times of the year, however, that may not be the only altitude limitation. The airplane has no fuel heaters, and that constrains the Meridian operation to fuel temperatures no colder than minus-34 degrees C. Remember, those are fuel temperatures, not OATs. The wet wing-tanks probably insulate the fuel a few degrees, so the OAT limit may be minus-37 degrees C or so.

Still, if you operate a New Piper Meridian up high in the northern United States or Canada during winter, you’re liable to see temperatures that cold or colder at heights well below the airplane’s maximum legal altitude of 28,000 feet. That can be a problem, and Piper is currently working on a fix.

Most pilots don’t buy an airplane in this class to fly at economy cruise, and given its head, the Meridian can speed along at 250 knots at 25,000 feet. If your mission allows a maximum fuel load, you can pump 170 gallons aboard the essentially all-wet wing. At a typical burn of 33 to 37 gph, that’s enough for a realistic 3.5 hours plus reserve or almost 900 nm between pit stops.

The airplane I flew was New Piper’s primary corporate transport—Jones flies it regularly with company president Chuck Suma in the back. I spent about three hours total flying with Jones, including an abbreviated run to altitude and an hour-long air-to-air session with a slower camera ship. Air-to-air is a great way to get to know an airplane because low-speed characteristics are more significant than high-speed habits. The Meridian proved an easy machine to drive along at 130 knots 10 to 20 feet from the Saratoga SP photo ship. Somehow, it seemed only appropriate that we elected to do the photo shoot above the beaches of Malibu in California.

We stayed low for our photos, but descents from the Meridian’s more typical flight-level operating altitudes demand some planning. Even if winds aren’t favorable up high, turbine-powered aircraft must fly tall to realize acceptable speeds. For that reason, pilots of turboprops and jets like to start downhill at a minimum 1,000 fpm, 2,000 fpm if winds are good up high and you need to maintain the push as long as possible. Letting down from FL250 to near sea level, you’ll initiate the descent 12 to 15 minutes out, as much as 60 miles from your destination.
Advertisement

Idle power is just over 50%, so even if you ease the thrust all the way back to the aft stop for descent, the airplane retains its 5.5-pound pressurization differential. The bad news is that after you land, 50% thrust will still propel you down the runway with enthusiasm after touchdown. Accordingly, as with most propjets, the Meridian’s paddle-bladed prop is fully reversible, although there’s little cause to use reverse thrust during landing. Typical approach speeds are essentially the same as those for the Piper Mirage, 90 to 100 knots, and if you touch down at 80 knots, the manual suggests not to use reverse below 60 knots to avoid possible prop damage. That means you’ll only be in reverse for a few seconds should you elect to use it. Jones says he sticks to beta mode when he needs a little extra braking and prefers to stay away from full reverse altogether (that only delivers about 70% thrust anyway).

The airplane is a flexible machine, comfortable and stable if you need to shoot an ILS into DFW at 120 knots, but it will as easily accept an 80-knot short-field effort into an unobstructed 2,500-foot strip. There’s no reason any pilot with a modicum of time in Bonanzas, Centurions, Saratogas or the like shouldn’t adjust to the Meridian in a few hours.

At this writing, no one can guess what the emergence of the new very light jets (VLJs) will do to the general aviation jetprop market, especially the Meridian and TBM-700. (The 10-seat-plus capability of the PC-12 and Caravan may partially insulate them from the VLJ threat.) Cessna, Adam and Eclipse all offered impressive displays at the recent EAA AirVenture, but prices keep rising on virtually all the VLJs, and what was initially promised for prices as low as $1 million may eventually sell for $2 million or more. Visionaries such as Vern Raburn and Rick Adam very well could revolutionize the industry with their 340- to 350-knot VLJs, but certification is probably a year away at the earliest, and the first production airplanes may be even farther down the road.

Pilots with a yen for a high-performance turbine single can invest their $2 million in the slick, comfortable and imminently easy-flying Meridian, certainly one of the simplest propjets in the sky. Call New Piper at (772) 567-4361 or visit www.newpiper.com.