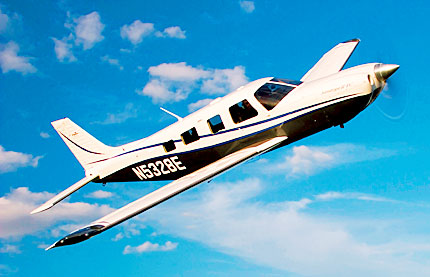 Any list of general-aviation evergreens is bound to include certain airplanes: The Cessna 170 and 172 would be near the top of the list; Piper’s venerable Super Cub would be a strong contender; Beechcraft’s straight-tail Bonanza would definitely qualify; and the Piper Cherokee Six also would likely make the list. The original Piper Lance was a retractable version of the Cherokee Six 300, and it was such a good idea back in 1976, the basic airplane has survived for almost 30 years. Blessed with the friendly, comfortable cabin of the Cherokee Six 300, the Seneca’s gear system and a strengthened, extended version of the semi-tapered wing employed on the Warrior, the Saratoga offered six usable seats (at reduced fuel loads), cruise speeds over 150 knots and the reliable power of one of the industry’s favorite engines, the 300 hp Lycoming IO-540. Granted such features, the basic PA32R design has evolved to become practically an evergreen in its own right.

The ultimate, modern iteration of the retractable Cherokee Six is the 2005 Saratoga II TC. As you might expect, the newest model is a considerably improved airplane from the original, but its ties to that first 1976 Lance remain obvious.

The Saratoga II TC need make no apologies for its links with the past. The current airplane has employed the same fuselage, powerplant and wing for nearly a quarter-century, mainly because the combination works so well. Fortunately, New Piper’s engineers don’t subscribe to the philosophy “If it ain’t broke, fix it till it is,” so the basic aerodynamic and power configuration of the current airplane remains similar to the original.

Despite the age of the original design, there’s nothing antiquated about the new Saratoga II TC. The panel is as modern as tomorrow. With only your credit line as your guide, it’s possible to fit the Saratoga with Avidyne’s multi-talented, flat-panel displays, air conditioning and enough other electronic goodies to make an Airbus 330 pilot envious.

New Piper’s turbocharged Saratoga endears itself to virtually everyone who flies it on a more basic level, however, not because of dramatic climb or blazing speed, but by reason of its truly benign handling, supreme cabin comfort and easy loading flexibility through the twin, aft-left cargo doors. At the airplane’s full 3,600-pound gross, handling characteristics are predictably heavy and bear-like, but they’re more reminiscent of a teddy bear than a grizzly.

Ten years ago, I had the pleasure of ferrying a new Saratoga HP 10,000 nm from Piper’s Vero Beach, Fla., factory to Melbourne, Australia, and the trip was one of the most comfortable Pacific crossings I have ever made. Max takeoff weight was 4,500 pounds, 900 pounds over gross, but the Saratoga hardly noticed. Initial climb was probably 650 to 700 fpm rather than the stock 1,100 fpm, but the airplane performed far better than I had expected, never even hinting at that verge-of-destruction feeling that is so common when operating an airplane 25% above normal gross weight.
Advertisement

Flying the new 2005 airplane with Piper chief pilot Bart Jones at this year’s Sun ‘n Fun Air Show in Lakeland, Fla., was like old-home week for me. I was reminded once again of the airplane’s spacious interior and easy access in the front and rear. I operated a 1975 Seneca II for three years and 500 hours back in the late ‘70s, and the Seneca’s fuselage is identical to the Saratoga’s. With 140 more total horsepower, the Seneca is notably more enthusiastic in climb, but other than that, the differences between the twin- and single-engine airplanes are relatively transparent.

This year, the big news at New Piper is the approval of a TKS ice-protection system for the Saratogas and 6X series of airplanes. In case anyone cares, TKS stands for Tecalimet, Kilfrost and Sheepridge Stokes, the three British companies that conceived the system. TKS, sometimes known as Weeping Wing, seeps a special, glycol-based fluid from tiny, laser-drilled holes in the titanium leading edge of wings and tail. Each hole is about the diameter of a human hair, invisible without a magnifying glass.

The extremely dense liquid (9.2 pounds per gallon) flows across wings and tail, and is slung outboard along the prop, making it almost impossible for ice to adhere to those surfaces. There are two operational settings—normal flow (or anti-ice) and max flow (or de-ice). With the Saratoga’s 4.4-gallon tank of TKS fluid topped off, the system will run at normal anti-ice for two hours, max de-ice for an hour. As you might imagine, the higher setting is designed to get rid of ice you have already accumulated, while the lower setting is intended to ward off anticipated icing (duh!). TKS works extremely well, far better than the old-style rubber boots, and if you fly around the northern United States and even some parts of the southern Midwest in the fall, winter and spring, you may need all the icing protection you can get.

A good friend, Reed Pryor of Boston, flew his Mooney 201 around the world with an aftermarket TKS system. Pryor flew hard IFR on a regular basis, both summer and winter, and his standard procedure when there was any possibility of icing about was to merely flip the switch to high flow just before punching into the clouds and to operate with relative impunity in even moderate to heavy icing conditions. Reed told me the system was so effective, the only way he could tell he had even been in icing conditions was the baseball-sized accumulation on the OAT probe at the top-center windshield.

Full icing certification can be expensive, especially for an aircraft manufacturer located in Florida, and Piper didn’t apply for known icing approval on its TKS system. In the ‘80s, Piper used a Cheyenne II as an ice-dispenser aircraft and would fly certification aircraft behind the dispenser, accumulating the required loads of ice and breaking it off to prove their de-ice systems for certification.

For all those reasons, it wasn’t economically feasible for Piper to seek full approval. The very name, Piper Inadvertent Icing Protection (inevitably PIIP), suggests the system is only for accidental encounters with frozen IFR. That means you can’t depart into known icing, but you can use the system to get out of an emergency encounter. PIIP is priced at $27,500.

As with most big singles, the Saratoga II TC won’t carry full seats with full fuel and the options most pilots prefer. Piper lists the Saratoga TC’s standard useful load as 1,149 pounds. Subtract the inevitable 50 pounds of miscellaneous options and another 76 pounds for a fully serviced TKS system, and you’re left with 1,023 pounds of truly useful load. Full tanks would reduce that to 411 pounds in the cabin. You get the idea.

Fortunately, two factors help mitigate the situation. Most pilots rarely carry more than two or three folks at one time, and it’s not always necessary to fill the tanks. Sight gauges in the wing make partial fueling easy. If you were planning an IFR trip with a pilot as well as three passengers and wanted a hedge against icing, you could still carry nearly 60 gallons of avgas easily enough for two hours plus the appropriate reserves.

Two hours of flying could take you quite a ways over the horizon in a turbocharged Saratoga. At non-oxygen altitudes, the Saratoga TC can deliver cruise speeds better than 170 knots, and that number jumps over 180 knots at 15,000 feet. With two hours of endurance at high cruise, you could plan on nearly 350 nm, farther than most business or personal trips. If the payload allowed carrying full fuel and you needed longer range, the Piper Saratoga TC could reach out and touch a destination over 900 nm away. Max operating altitude is 20,000 feet.

No matter what the stage length, the Saratoga TC’s turbo allows the pilot quite a bit more flexibility when the point of departure is high or hot. Critical altitude, the height above which power begins to fall off, is nearly 15,000 feet, so even Leadville, Colo., (at 9,927 feet of elevation) in the summer would pose no great problem for a careful pilot.

The Saratoga TC’s pilot and passengers luxuriate in a cabin that measures 49 inches across by 42 inches tall. Even rear-seat occupants enjoy plenty of elbow room. If baggage allows, rear riders can recline their seats back, put their feet up on the aft-facing center seat cushions and stretch out practically full length.

Piper used to advertise the Cherokee Six, Saratoga and Seneca fuselage with the aft four seats removed and a small piano in their place, and once you climb inside, you’ll understand why. It’s a large enclosure, over 10 feet long, but more importantly, the cargo doors allow you to place large loads aboard.

The long fuselage could easily allow loading the airplane outside the aft limit, and Piper provides a forward baggage compartment to help offset the problem. Mounted directly in front of the main cabin and behind the engine, the front baggage container can handle as much as 100 pounds of miscellaneous stuff, and it’s far enough forward to balance the CG. It’s also naturally heated by that big, 540-cubic inch Lycoming only a few inches farther forward on the opposite side of the firewall.

Like the old Cessna 210 Centurion and Beechcraft’s A36 Bonanza, the Saratoga TC may shine brightest when it’s time to return to Earth. The airplane manifests good stability in instrument conditions, making the type a popular choice for businessmen and pilots who need to fly pretty much whenever and wherever. Driving down an ILS in hard, turbulent IFR in a Saratoga is about as simple as it gets.

With plenty of pre-stall buffet, a 61-knot limit dirty stall speed and reasonable handling at low speeds, it can use 80-knot approach speeds in VFR conditions and fit into 1,500- to 2,000-foot strips without anxiety. Crosswind manners are excellent, judging flare height is easy, and ground handling characteristics are exemplary.

Equipped with the Avidyne avionics, air conditioning and Piper’s TKS system, the Saratoga II TC offers good performance, plenty of room and ultimate capability. If you’re interested in an unpressurized, turbocharged six-seater, the Saratoga TC is tough to beat.