The EAA Pilot Proficiency Center at AirVenture 2017 surpassed its previous records for attendance, and if you had a chance to go last year but not this year, you might be wondering how that was possible, since the Center was packed from early to late last year as well. The Pilot Proficiency Center aims to give thousands of pilots at AirVenture a hands-on flight experience in a simulator or a chance to participate in an engaging and interactive technical seminar so pilots leave AirVenture not only more engaged but a little more proficient as well. 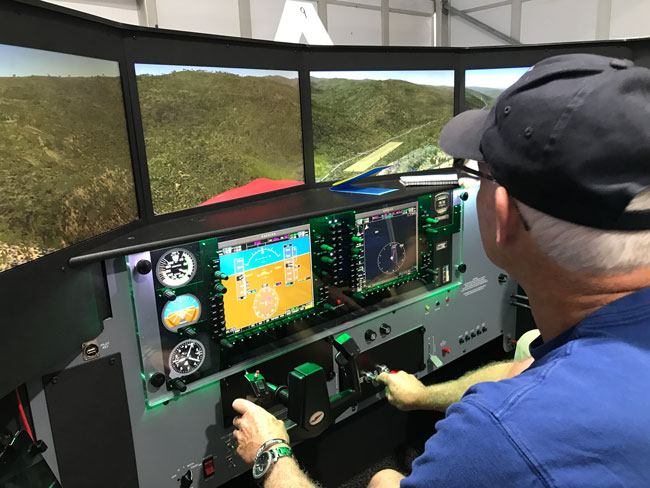 Joe Brown, president of Hartzell Propeller, the creator and driving force behind the  Proficiency Center at AirVenture, said the numbers were better in 2017 in part because there were more offerings throughout the day, including a series of breakfast seminars presented by AOPA and in part because the people behind the organization of the event figured out ways to make the schedule more efficient though an automated email service that pilots used to confirm their appointment or, if they were too busy out at the warbird area to make it back in time, to let some other pilot nab their spot.

In an email to Plane & Pilot, Brown said that the center on Friday set a new one-day record with 1,015 pilots attending one of the sessions. On that day, Brown said, 160 pilots went through a sim session and the rest attended Tech Talks, sponsored by Jeppesen, including two that had standing-room-only crowds in excess of 200 pilots.

Over the course of the week, the center served up some proficiency training to more than 4,300 pilots, including more than 1,000 pilots who got to try their hand at an IFR or VFR scenario at one of 14 Redbird simulators under the watchful eye of a dedicated NAFI or SAFE certified flight instructor.