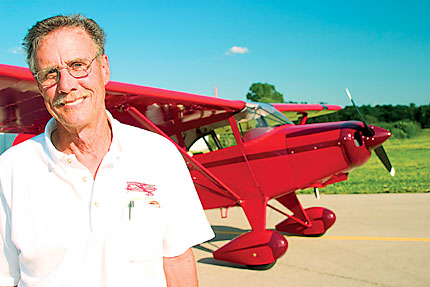 If you’re considering a bare-minimum, entry-level airplane, it’s tough to beat the high-wing Pipers of the late ‘40s. It seems everyone and his brother was offering a minimum, entry-level airplane following the war—Globe, Luscombe, Aeronca, Porterfield, Ercoupe, Cessna and others—but with the legacy of the Cub as a reference, Piper’s various models also are excellent choices.

From 1945 through the early 1950s, you have your choice of a variety of two- to three-passenger taildraggers, typically for less than $20,000. Most of these airplanes are capable of cruising at 70 to 85 knots with a reasonable load, and they’re among the most economical airplanes to operate.

Virtually all those models were derived in one form or another from the basic J-3 Cub, updated and renamed the PA-11 Cub Special after the war. (For you trivia buffs, the original J designation stood for Walter C. Jamouneau, Piper’s chief engineer in the early ‘30s.) J-3s were adapted to an amazing variety of configurations, including, would you believe, a biplane. Depending on how you count, there were nearly a dozen tailwheel models produced, from the basic PA-11 Cub to the PA-20 Pacer. They’re all economy champs, simple, efficient airplanes perfectly suited for the pilot who wishes to economize on both purchase price and operating costs.

Gilbert Pierce of Germantown, Tenn., is one of those pilots. First licensed in 1990, Pierce was determined to fly at a minimum cost, although he didn’t start off with a high-wing Piper. “After I learned to fly, I almost immediately began building a Kitfox,” says Pierce. “I took three years to finish the Kitfox, and it was a fun-flying little airplane. The problem was the ‘little’ part. The Kitfox was just too cramped and slow to be practical as a traveling machine.”

As a result, Gil and his wife, Barbara, went looking for a short-wing Piper. They found their airplane a year later—a bright red PA-16 Clipper in the Pacific Northwest. The Pierces’ airplane is a 1949 model, the only year of Clipper production, although in name only. Pan American Airways objected to Piper’s use of the Clipper model name, insisting it had it copyrighted and that Piper should cease and desist. Bill Piper reasoned the Clipper designation had been applied to sailing ships long before there were airplanes, much less airlines, but he felt the court battle wouldn’t be worth it. Accordingly, the 1950 model was renamed the Pacer.

Talk about minimalist design. Technically, the Clipper was a four-seat, 115 hp follow-on to the two-place, 65 hp Piper Vagabond, a variant of the Cub. It’s interesting that the Vagabond’s fuselage was stretched only 16 inches to accommodate the rear seat, so aft-seat passengers needed to be little people or very short of leg. In an attempt to reduce drag and improve cruise performance, both the Clipper and the Vagabond featured a wing six feet shorter in span, with three feet removed from the root on each side.

Piper’s Vagabond and Clipper were the first of what were called the short-wing Pipers, consisting of the Vagabond, Clipper, Pacer, Colt and 125/135/150/160 hp Tri-Pacers. These variants of the Cub spawned one of the most enthusiastic aircraft type organizations in America, strangely known as the Short Wing Piper Club.

Shortly after acquiring their Clipper, Gil and Barbara Pierce began a complete rebuild that was to require eight years of off-season work. “The renovation was a work in progress for us,” reports Gil. “When air-show season was over and winter was setting in, we’d ground the airplane and start overhauling or rebuilding a major component, then reassemble everything for the flying season. We rebuilt and recovered one wing one year, the other wing the next, replaced the engine the following winter, totally redesigned and updated the instrument panel, recovered the fuselage the year after that and so on. In fact, we weren’t totally finished with the airplane until a few weeks before Oshkosh 2004. Barbara was an invaluable asset during the rebuild, especially on the recovering process. A knowledge of sewing was particularly important. She worked even harder than I did on the airplane, and she’s just as proud as I am of the result.”

The Pierces also received valuable support from their sons, Stephan and Chris. More than coincidentally, Stephan owns an aircraft restoration business and paint shop in Graham, Texas, and assisted in virtually every aspect of the rebuild of his dad’s Clipper, appropriately nicknamed Red Lady.

Advertisement
Perhaps the most significant improvement was the new, larger engine. The Pierces upgraded power on their Clipper from the stock, 115 hp Lycoming O-235 to the 150 hp Lycoming O-320. Son Stephan acquired a basket case O-320, and he and his father rebuilt the engine from the bottom up. Adding 85 cubic inches more displacement out front also necessitated an entirely new cowling and, again, Stephan came to the rescue with a completely redesigned cowl.

Such a major power increase with the same 1,650-pound gross weight resulted in a dramatic improvement in takeoff performance and climb plus a notable speed-up in cruise. To more than offset the 36-pound weight increase associated with the bigger engine and prop, Gil later applied for and received a one-time, 150-pound gross weight increase to 1,800 pounds, the same as the later Pacer’s all-up weight. “I was able to prove to the FAA’s satisfaction that there’s no real structural difference between the Clipper and Pacer,” says Gil, “and on that basis, they gave me a field approval for operation at 1,800 pounds.”

To provide adequate fuel for the larger engine, Gil increased capacity to 36 gallons with the addition of a Colt fuel tank in the right wing. Gil says he regularly flight-plans for three-hour legs and usually has six to seven gallons of fuel remaining, a reasonable VFR reserve.

The finished airplane is about as perfect an example of a short-wing Piper as you’ll find, and we’re not the only ones who think so. The Pierces’ Clipper won Grand Champion at the 2004 Short Wing Piper Convention in Sault Sainte Marie, Mich., and was awarded Outstanding Custom Classic Class B honors at the 2004 EAA AirVenture Oshkosh show in Oshkosh, Wis.

So what’s it like to fly a prize winner? Once you work your way past the intimidation factor of flying such a pristine machine, the Pierce family Clipper handles very much as you’d expect, only better. Everything works perfectly and, of course, with the benefit of the big engine, performance is well ahead of book.

Gil and I flew out of Fond du Lac, Wis., immediately after the EAA AirVenture show, and he magnanimously put me straight into the left seat for the initial formation takeoff on Plane & Pilot’s Skylane photo ship. Despite the Clipper’s tailwheel configuration (or arguably because of it), the airplane was a joy to fly during the power-up, takeoff roll and liftoff.

Acceleration was excellent with 150 hp encouraging probably 1,600 pounds of Clipper, journalist and proud owner. The light controls and plentiful power helped keep the PA-16 close to our lead airplane for the duration of the photo shoot, and the Skylane pilot was surprised how little she had to come back on power for us to stay with her.

Better still, though, was the way Gil’s Super Clipper flew when it was unleashed. “I really didn’t know what to expect from all the extra power,” says Gil. “Even the Pacer never had more than 135 hp, and the Cub wouldn’t see 150 hp until 1966, so my airplane was flying with quite a power advantage that no original Piper of the time enjoyed.”

One minor inconvenience surfaced when Gil discovered the Clipper was flying so fast that air loads on the horizontal stabilizer made trimming the elevator difficult because the trim cable would simply slip on the pulley. Gil and his son installed a new, double-groove pulley system out of a Tri-Pacer that provided more trim power and solved the problem. “That mod alone required seven field approvals from the FAA,” comments Gil.

Despite the Pierces’ Clipper’s additional power, the smaller wing kept the airplane from sharing the Cub’s phenomenal short-field capability, but their PA-16’s runway requirements are nevertheless minimal, perhaps 700 feet for takeoff and a similar distance for landing. Once in the air, the additional power translates to dramatically better climb than the stock machine.

“The standard PA-16 never did much better than about 500 fpm,” says Gil, “but after we installed the new engine, I could count on at least 900 fpm, sometimes more. I’m certain the service ceiling improved as well, but I normally don’t fly high enough to find out.”

Straight-line performance escalated so much that Gil was forced to install a climb prop to keep the speed down. “We were seeing about 90 knots at max cruise before the conversion,” he explains, “and the big engine drove the airspeed well up into the yellow, so I decided to go with a climb prop to maintain cruise speed at 105 knots. In other words, we picked up something like 15 knots from the conversion.”

The first major trip with the new engine was to Anchorage, Alaska, for the 2001 Short Wing Piper Convention. Gil was freshly retired and eager to break in the new engine, and the 3,000 nm trip from Tennessee to Anchorage was a perfect opportunity. “We burned about 8 gph on that trip, so the Clipper yielded about 15 smpg—not bad considering we were traveling right at double the speed of the cars below on the Alaska Highway.”

As I discovered during my short flight, landing manners are fairly sedate, especially considering that this is a narrow-geared taildragger. Piper had no airplane that competed head-to-head with the Cessna 170, but the Pierces’ modified Clipper is on par with the popular Cessna and lands equally easily. The Clipper uses a cord gear suspension that works remarkably well, provided you keep the approach speed to 60 knots or less.

Gil and Barbara are inveterate air-show fans who plan to campaign their Clipper around the country, especially at Sun ’n Fun, EAA AirVenture and the Short Wing Piper get-togethers. Now that they’re basically finished with the renovation, they’ll probably be looking for places to fly, and as their trip to Alaska suggests, they’re not afraid of long distances. So if you’re flying to any of next year’s shows and see a sparkling-red Piper Clipper flying faster than it has any right to, you can probably guess who’s at the controls.