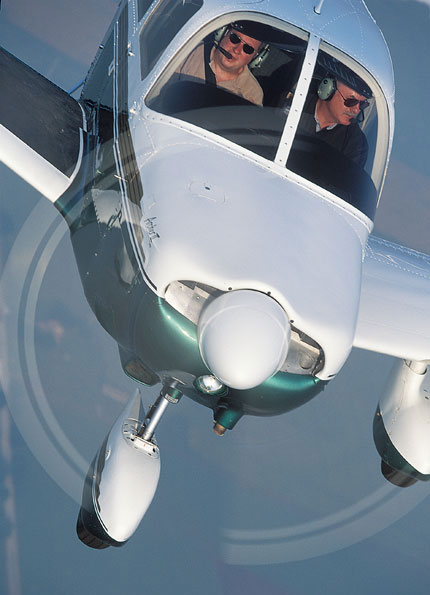 Suppose you know a guy who’s a graduate of the Lockheed Skunk Works. I’m sure you have one of these guys at your local airport. One of those guys who spent most of his life building the world’s fastest, highest-flying, nearly invisible airplanes. The kind of guy who built extreme airplanes—airplanes that nowadays are famous, but during their operational life, he couldn’t even brag to his wife about. One of those “If I told you, I’d have to kill you. No, really, I’m not kidding” kind of jobs building airplanes like the world’s fastest—the SR-71—and the world’s highest-flying glider with a really big engine—the U-2 spy plane. Airplanes like the super-secret Have Blue, the prototype of the F-117 Stealth Fighter, and the F-117 itself. This is a guy who won the Collier Trophy, given since 1911 for accomplishments like breaking the speed of sound.

Now suppose this guy was a pilot. You’ve got to ask yourself, what kind of airplane would a guy like that choose? Would he choose a vintage twin, like Henry Cotton’s Lockheed Vega spy plane? Would he choose a really fast airplane, perhaps one with aerospikes, like the Lancair IVP? Or maybe he would like a stealthy workhorse, like a Piper Cub?

I know that guy. He’s unassuming Ron Pyles of Fort Worth, Texas, and he chose to fly a Piper Archer II. It turns out Pyles is a pilot like the rest of us. He likes to fly for fun, and he doesn’t want to spend a ton of money to do it. For Pyles, the Archer II was a perfect choice, although it took him a while to figure that out.

Pyles became interested in flying when he was 14 years old. A neighbor was building a wood biplane of his own design, and Pyles helped him as often as he could. One day, the neighbor had mounted the engine and propeller, and wanted to test it. The neighbor put Pyles in the front seat, briefed him on how to start it and went around front to hand-prop it. The engine started on the first pull, and Pyles tried to retard the throttle, only to find that the linkage failed and the throttle went wide open.

The airplane jumped the chocks and headed toward the garage. Unfortunately, Pyles wasn’t briefed about brakes; fortunately, the structure inside the garage stopped the airplane before anyone was hurt or too much damage was done. The builder was a Lockheed test pilot. Pyles’ entire neighborhood worked in the local aviation businesses and made sure that Pyles didn’t take the mishap as his fault. The test pilot took him for his first flight, and Pyles rode with him many times during his high-school years.

Pyles grew up with airplanes in the air. “It was all in the valley. Any airplane that ever flew went through Palmdale and Edwards, California,” he recalls. Northrop, North American Rockwell, Boeing and Lockheed all built airplanes in Palmdale. Pyles’ dad worked for Douglas, giving Pyles an instinctive affinity for all things mechanical. Naturally, Pyles reported to Lockheed right out of high school and almost immediately went to work on “black” projects. You know, the secret kind.
Advertisement

His interest in flying peaked when he turned 20 and decided to take flying lessons. Family and work took priority before he could finish, and it was nearly 16 years later that he came back to flying. After building some of those fast, high-flying airplanes and a host of others, like the JSF and the F-16, he was ready to fly on his own.

While working in St. Augustine, Fla., he drove by the airport one day and decided that now was the time. He promptly soloed in eight hours, and after receiving his private license, he had to own his own airplane.

Pyles extensively researched performance and maintenance issues and then decided that a Piper Archer would be a better airplane for him than one of the Cessnas in which he learned to fly. “I didn’t have a preference, high or low wing, but I do like the way the low wing on the Piper looks. The Archer is just a bigger Warrior,” he confesses.

Searching Trade-A-Plane and other places around the country, he found N47773 in the Jacksonville, Fla., paper. The 1978 Archer II was at his local airport, and even better, included a hangar lease. When he got to the T-hangar to look at it, there were two other pilots already there, checking out the airplane. It was apparent they liked it, but they couldn’t come to a decision. After they left, he inspected the airplane and decided it was just what he wanted, with 1,768 hours on the airframe and engine. He came to a fast decision and bought it on the spot. Later, he became friends with the other two pilots.

The first thing Pyles did with his new Archer was get his instrument ticket. The next thing he wanted to do was tinker. That’s one thing Pyles does; he starts slow and keeps at it, tinkering, that is. He decided that he needed to get his airframe and powerplant license to work on the airplane. He says matter-of-factly, “That way, I could work on the airplane and not have to pay someone else to do it.” So he did.

A freshly minted A&P, Pyles replaced all the plastic trim. With new trim, he decided the airplane needed to be repainted. But before that, he decided it needed a new interior and glass. Next came a new HSI, Loran and STEC autopilot. Explaining his restoration progress, he says, “It was new to me, and the more I did, the more I wanted to do.” Oh, Pyles did finally repaint the airplane.

Pyles says of the Archer, “The airplane has never let me down. I even had my first date with my wife, Casey, in this airplane. Well, sort of. Actually, I took a double date on a trip to Hilton Head. That’s where I met her, several years before we got together. Our first date was actually to the fly-in at Oshkosh.”

The Piper Archer is a reliable airplane, if AD notes or Service Bulletins are any indicators. Few have been issued over the years. The worst airframe note was for possible corrosion of the wing spar (Pyles’ airplane didn’t have any problems in this regard). These Pipers do have Lycoming engines subject to the oil pump impellor gear AD, and Pyles’ was no different. When Pyles’ engine approached the AD required time limit for replacement, he approached it in the only fashion he could: He decided to overhaul the whole engine himself.

Pyles took the engine apart and sent out the crankshaft and other critical components to be checked. Everything else he did himself, and then he reassembled it and test-flew it, too.

Now it’s time to enjoy the airplane. Not content to fly around the local area, Pyles has flown it from one end of the country to the other, getting 9.5 gph at 120 knots. Now most of his trips are with two or four people on the weekends, sometimes at night to see the lights over Fort Worth, sometimes across town for breakfast. The most important thing for Pyles is he has fun with the airplane in the air or with the cowling off.