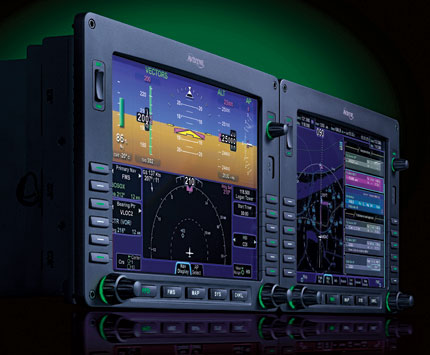 A flight down Florida’s east coast is replete with tropical playground panoramas, but the million-dollar view isn’t enough at the moment to pry my eyes from the dual IFDs (Integrated Flight Displays) of Avidyne’s new Entegra Release 9, installed in the company’s Cirrus SR22. I ask Michael Keirnan, Avidyne’s director of aircraft integration and certification, in the right seat, if pilots tend to stare at the screens instead of looking out the window. He reluctantly nods and half smiles, proud, I’m sure, of the panel-fixation problem he and the Avidyne team have created. But staring at the panel isn’t much of a safety issue in this case: I can see traffic, weather, approaches and anything else I need on the displays. And most impressive is how quick it is to input flight plans, program and fly approaches, and get help staying ahead of the airplane. Finally, “open the pod door” simplicity is coming to the glass panel.

Avidyne introduced the glass cockpit to GA in 2003 and has added features and offered several new releases for its Entegra system since then, but Release 9, nearing FAA certification, represents a major advance. The bezels on the faceplates of the 10-inch screens are similar to the Entegra displays in factory-equipped Cirrus and Piper aircraft. But behind the familiar façade is a totally new system, as Mike Ingram, Avidyne’s senior director of engineering, showed me earlier that day at the company’s offices in Melbourne, Fla. The display screen fronts a box with slots for plug-in blades, LRUs (line-replaceable units) that can quickly be pulled out and replaced for repairs or upgrades. The blades drive all screens, and any display on one screen can be called up on the other, erasing the distinction between PFD and MFD screens, hence the “IFD” designation.

Release 9 also features an optional Flight Deck Controller (FDC), also referred to as a control/display unit (CDU), with a full QWERTY keyboard that further simplifies data entry. A map pointer on the FDC moves a cursor so you can, for example, see the weather ahead or behind you and change the map scale by rotating the pointer knob.

“We spent a lot of time with pilots doing evaluations, and put them through different scenarios,” Ingram said as he introduced me to the new Entegra in a simulator on the ground. “We noticed where they fumbled, and what knobs they grabbed when they wanted to do certain things.”
Advertisement

As I was seeing on my flight with Keirnan, the overall result is an easy-to-learn, intuitive glass-panel system that anticipates what the pilot is going to do and significantly reduces IFR workload. Much of the credit goes to the FMS900w, the brains behind Release 9. The system is “context-sensitive”; it knows where you are, and nominates frequencies, waypoints and routes when flight planning or flying. Thus, often all that’s required to input data is a click to confirm a selection the Entegra has suggested.

The system has five primary function modes: Primary Flight Display (PFD), Flight Management System (FMS), Maps (MAP), Engine and Flight Systems (SYS) and Checklists (CHKL). Each mode is selected from a corresponding key on an array across the bottom of the bezel. The mode pages, in turn, have associated “tabs” on the bottom of the display, each representing an alternate or split-screen view of the mode. The same keys that select the modes also operate as left and right toggles to cycle through on-screen tabs. Tabs on the PFD page, for example, enable flight plan, maps or system information to be displayed on a split screen along with PFD information. Two dual-concentric push-button knobs (DCKs), located at the bottom corners of the bezel, can be used to input data or scroll down and select menu options.

﻿Avidyne introduced the glass cockpit to GA in 2003 and has added new features and offered several new releases for its Entegra system since then, but Release 9, nearing FAA certification, represents a major advance.

We had created a flight plan from Melbourne International (KMLB) to Palm Beach International (KPBI). The system already knew where the flight was originating from, and as soon as I input “KP” on the keypad, the system suggested KPBI as the waypoint I had in mind, thanks to Release 9’s “GeoFill” function, which anticipates what you’re inputting based on proximity and direction of flight. As soon as I confirmed KPBI as the selection, GeoFill populated the flight plan with all the fixes in between and also suggested a waypoint for joining V3, the airway along Florida’s east coast, from our departure point. The FMS also displays the individual legs of the flight plan along with information for each, including course, distance, ETE and crossing altitudes where applicable.

The top half of the pilot’s IFD always displays the PFD view, showing power setting, airspeed, attitude, altitude and vertical speed. (The PFD presents a generic exterior view, but after initial certification, Avidyne plans to add both synthetic- and enhanced-vision display capability to this mode.) On the right screen we had MAP mode displayed, giving a full-screen view of the land below and the flight route we had in the FMS. A simple toggle click split the right screen so we could see the map and the flight plan legs side by side. (The active leg in the flight plan is always magenta, helping direct the eyes to the most important data.) The high-resolution, 1,024×768-pixel, backlit LED display is exceptionally crisp and vivid, even in bright Florida sunshine.

The IFD5000 display also has six line select keys (LSKs) on each side of the bezel that control fields or functions appearing on-screen beside the LSKs, depending on the page and tab being viewed. For example, LSKs are used to select radios, turn the weather overlay on or off, or arm an approach. Though individual LSKs are dormant in many mode views, whenever an LSK is active, it’s illuminated, making it easy to see what to pay attention to and what can be ignored.

If you have a change of plans, you can divert to another airport without reloading a destination. Passing by Vero Beach (KVRB), we decided to shoot the runway 11R VOR approach at the airport. After highlighting the airport on the FMS, I pressed the dedicated procedures button (PROC) on the FDC, and a list of approaches at the airport appeared. I scrolled and pressed the FMS knob to select the desired approach, and the plane turned toward the IAF (initial approach fix). (If I pressed “vectors,” the autopilot would let me choose my own course using the heading bug.) The approach and missed approach procedure were superimposed on the map, and I could put any view of the Jeppesen approach plate I wanted on the screen in front of me.
Advertisement

Release 9 can fly any approach, including procedure turns, enter and fly holds and execute missed approaches, without requiring the operator to master a thick instruction manual. It takes the mystery out of flying a glass panel. As Keirnan had said on the ground, “This does a better job of letting pilots know, ‘What have I planned, and what should I expect to happen next?’”

Avidyne is introducing Release 9 as an aftermarket upgrade for Cirrus and Piper aircraft equipped with Entegra panels. Certification for Cirrus aftermarket installations is expected in the first half of 2009; in the second half of 2009 for Pipers. Contact Avidyne for exact pricing and availability.

We finish our flight with the runway 9L GPS approach into Melbourne. But the Entegra isn’t through providing navigational help and situational awareness. I’m not sure where the Avidyne hangar is among the rows of identical buildings. “That turnoff,” Keirnan says. He isn’t pointing outside. His finger is aimed at an upcoming taxiway intersection on the map page, just ahead of the depiction of our taxiing airplane. For more information, visit www.release9.com.