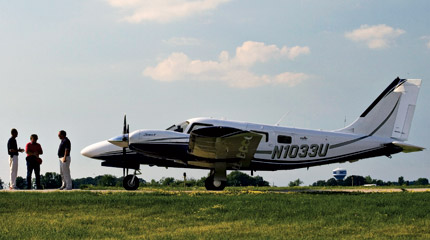 At the risk of compromising my alleged objectivity, I have to confess a soft spot for the Piper Seneca. Back in the late ’70s, I spent two years with a Seneca II company airplane. I logged 500 hours in that twin, flying all over the States, Bahamas and Canada—operating solo or with six on board—and bouncing off strips from below sea level to America’s highest airport (located in Leadville, Colo.) at nearly 10,000 feet MSL.

One benefit of having spent several hundred hours with the old Seneca is that I have a special appreciation for the new one. I won’t bore you with the long list of improvements in an airplane that looks structurally similar to its grandfather, but take my word for it, the new Seneca V is several generations removed from that first turbocharged PA34.

For those pilots who’ve been living on the dark side of the moon for 30 years, the Seneca is essentially a Cherokee Six with retractable gear and dual 220 hp Continentals. Piper has always been one of the most innovative companies in adapting existing designs to new applications, and the original Seneca followed this formula.

The Lock Haven, Penn., company had a deserved reputation as a strong advocate of moderately priced, multi-engine airplanes. The bulbous Apache and Aztec of the late ’50s evolved into the Twin Comanche and Navajo of the ’60s. Senecas came along in the ’70s, and few would have guessed the airplane would survive the GA crash of the ’80s and march on into the next century.

Today’s Seneca V is one of only five surviving piston twins; it’s a considerably more refined and functional machine than the Seneca II I used to fly. The 2008 twin market includes the Diamond Twin Star, Adam A500, Piper Seneca V and Seminole, plus the Beech G58 Baron.

The six-cylinder Continental TSIO-360 engines, which have evolved from 200 to 220 hp, are now intercooled and employ automatic sloped controllers to maintain even power and avoid overboost. TBO has increased to its current 1,800 hours, and what was once a marginal powerplant has become envied and reliable.

Max takeoff weight has increased almost 200 pounds (a good thing since empty weight has gradually increased from 2,840 to 3,393 pounds), wing span has widened by two feet, and single-engine service ceiling has stepped up from 13,400 to 16,500 feet.

Well, duh! It’s not as if you wouldn’t expect some improvements in 30 years. Fact is, however, the Seneca’s survival in a marketplace that hasn’t looked all that favorably on twins is at least a partial vindication of the airplane’s configuration and mission. (Perhaps incredibly, there were about a dozen piston twins in production at the end of the ’70s.)

The Seneca is one of only two Pipers that’s managed to stay in more-or-less continuous production through the 1980s, 1990s and 2000s. The PA34 and Malibu Mirage were the only models to survive the partial shutdown of the company in the early ’90s.

The current Seneca remains essentially a multi-engine Saratoga. Considering that the Piper Seminole is pretty much a dedicated multi-engine trainer and the Beech G58 Baron is priced just over $1 million (nearly into entry-level VLJ territory), the Seneca V is virtually alone in its class. Base price of the Seneca V for 2007 is $756,500, and while that’s still a considerable sum, it buys an airplane with more talent than you’d believe.

Perhaps the most notable of these talents is simply the airplane’s large, comfortable cabin. Size matters, especially when you’re traveling in a machine that can’t be conveniently pulled over for a break. Airplanes, like people, tend to gain weight with age, but the Seneca’s cabin is a pleasant constant.

While payload has shrunk as empty weight has increased, cabin size is among the best in the industry. Cabin width is a spacious 49 inches, slightly wider than a Mirage and roughly the same dimension as the cabin-class Piper Navajo. The cabin does begin to taper toward the tail abeam the second row of seats, but there’s still enough room to load anything, from a coffin to a piano to people.

Piper loves to tout the Seneca’s excellent quick-change cargo capability, and it’s true the PA34 will accept a variety of loads. The reality is that the airplane will most often be used to carry people rather than things. Pilots board in the conventional manner via the right wing walk and luxuriate in the front office, but passengers relegated to the rear need not feel like second-class citizens.

Boarding the aft cabin is probably easier than in any other airplane I can think of. Climbing aboard through the twin, aft, left doors hardly deserves the term “climb.” You merely step over the low floor and lever yourself into one of the big seats. Separation between the conference-style second- and third-row seats is generous to minimize overlapping legs. If you’re flying with no one in the opposing seat, you can put your feet up and feel like a business-class airline traveler with a luxury footrest. There’s even a side-mounted writing table on the airplane’s right side.

Over the years, useful load has declined from more than 1,700 pounds on the Seneca II I used to fly to more like 1,400 pounds on the new Seneca V. Subtract 122 gallons’ worth of fuel (732 pounds), and you’re left with only about 670 paying pounds. Leave 50 gallons in the truck, and you’d have nearly six folks’ worth of payload with two hours of fuel aboard. A strange-shaped baggage compartment wrapped around the nosegear and a large space behind the rear seats accommodates cargo.

Whatever the payload, the Seneca V’s turbocharged Continentals allow you to lift easily and efficiently. The airplane comes off the ground and starts uphill cleanly and without hesitation to catch its breath. Initial climb is listed at 1462 fpm, but most pilots prefer a 130-knot cruise climb, sacrificing perhaps 250 fpm of ascent in exchange for improved forward visibility.

There’s little to do on the way up except admire the view and marvel at the Seneca’s simplicity. Automatic wastegates keep the power stable to the airplane’s critical altitude (19,500 feet) where the horses begin to tire. If you’re climbing to any altitude below 16,000 feet, you can usually plan on averaging at least 1,000 fpm. Sixteen minutes after liftoff from sea level should yield 16,000 feet of height. Simple, huh?

In theory, the Seneca’s turbochargers allow cruise as high as 25,000 feet, and if you’re willing to strap on the cannula and climb to the flight levels, you can see speeds near 200 knots. Realistically, Senecas spend most of their time at lower altitudes that don’t demand supplemental O2. At 11,500 feet, with the engines dialed in at 75%, for example, you can expect an easy 180 to 185 knots on about 26 gph. That will deliver just under four hours of endurance for a nearly 700 nm range. For those strange people who buy fast airplanes to fly slow, 55% yields max range over 800 nm. 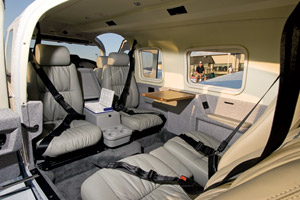 However long you elect to sit in the Seneca V, you’re bound to enjoy the experience. PA34s come standard with an Avidyne Entegra flat-panel display that incorporates all flight instruments, moving map, navigation and systems readouts on two large, 10.4-inch glass displays. Entegra offers overlays of weather uplink thru WSI InFlight and a full-time air-data computer to display en route wind vectors. Also, the system can be interfaced with Stormscope to survey electrical activity ahead, as well as Active-Surveillance Traffic Advisories, an active system that monitors possible traffic conflicts. TAWS information reads out on the glass panel and CMax electronic charts offer a worldwide library or approach and en route IFR charts. As if all that weren’t enough, the autopilot is coupled to the Entegra to make the in-flight environment as convenient and effortless as possible. (Honeywell’s RDR 2000 Vertical Profile Weather Radar is also available.)

The Seneca V is quiet with minimal vibration and excellent ventilation (including air-conditioning if your budget will allow), and the cabin is so friendly, you’ll make the trip with minimal fuss. The PA34’s fat, untapered, high-dihedral airfoil is as gentle as on any twin (past or present); the Frise ailerons impart plenty of roll rate; and both engines turn inboard to offset the critical engine problem. The combination produces a stability and gentle controllability more reminiscent of the Saratoga HP than of a middle-weight multi.

At 4,750 pounds gross, stall speed is a highly predictable 64 knots, so approaches are silly simple at any speed between 90 and 110 knots. The Seneca makes an excellent instrument platform, too. In the 21⁄2 years I operated “my” Seneca II, I flew it into snowstorms in Calgary, torrential rain in the Bahamas and ice fog in Maine. The airplane forgave my transgressions and consistently delivered me from evil, no matter how poor my decisions or rusty my technique.

(One approach I made to Janesville, Wis., in the late ’70s certainly demonstrated the airplane’s docile nature. I was shooting an ILS in miserable conditions. Weather was right at minimums, and I was being beat around pretty good trying to maintain the glideslope. The airplane was going to Janesville for maintenance, and one of the squawks was the left electric fuel pump. The left engine-driven pump failed about three miles out, and so did the engine, but I was so busy just trying to hold the needles, I hardly had time to worry about it. I broke out over the runway, and touched down as the left prop windmilled to a stop.)

Landings in the PA34 also fall into the “if you can walk and chew gum at the same time” category. The now-electric flaps deflect to a full 40 degrees, allowing the Seneca to sneak into short strips with relative ease, and the long-stroke oleo gear cushions the actual touchdown. Also, unlike the vast majority of airplanes, the Seneca can leap off the ground in slightly less runway than it needs to land. Both numbers are well below 2,000 feet, and that may be one reason PA34s sometimes wind up working for a living on dirt or grass strips. Main-gear doors cover only the top of the wheels, so there’s plenty of ground clearance with little risk of damaging a door. 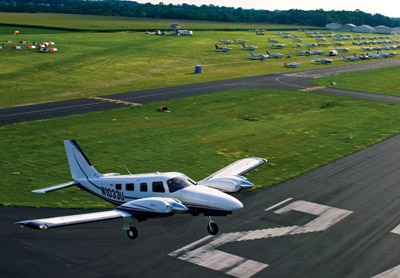 (In operating out of the 2,000-foot grass strip at Ft. Atkinson, Wis.—long since paved and extended—I was sometimes intimidated by the tall corn at the south end. During one takeoff on a hot July day with the manual flaps set at the recommended full-up position, the corn was approaching way too fast. I reached down, grabbed the manual flap lever and pulled for one notch to get me into the air. Unfortunately, I pulled too hard and got two notches, and the huge flaps promptly rotated the lightly loaded Seneca’s main gear off the ground and balanced the airplane on its nosewheel. I hauled back on the yoke and cleared the corn by a few kernels. Won’t do that again.)

At $756,500 for the entry-level airplane, the 2007 Seneca V fills a niche that no other model can. The big cabin, easy loading and good short-field performance allow the aircraft to serve in a variety of missions: mail and check hauling, freight and corporate transport, charter and as many other jobs as you can imagine.

By any measure, the Seneca V is a flexible, talented machine, simple to fly and fairly easy on maintenance (compared to other twins). Add to that quick cruise and enough creature comforts for most normal-sized creatures, and you have all the ingredients that have kept Piper’s tough little Seneca in production for a surprising 35 years.