When my friends and I want to kick back and chill during Oshkosh, you can usually find us parked near Runway 9/27 watching airplanes land. We tune in a handheld radio and listen to the temporary tower helping tiny taildraggers to warbirds and jets land on the green dot. It’s impressive! Pilots of all experience levels rise to the occasion, making their best landing ever in front of a hundred thousand of their best friends. But that’s Oshkosh—the pressure is on and the performance meter is pegged. How many of us practice spot landings like that in our day-to-day flying?

When you take the time to watch airplanes land, you’ll see some very interesting things. We have a lot of student flight training in Florida, so we expect to see the “lawn dart”— nose down, diving at the runway 40 knots above stall speed; the “floaters”—usually preceded by the “lawn dart” approach, leveling off at a high speed and hoping for an eventual touchdown; and the “porpoises”—often preceded by both the lawn dart and floater, touching down on the nose wheel-first while the airplane attempts to regain some equilibria. When things get bad, there’s the “shed splat,” when the airplane, in an attempt to make contact with the runway at all costs, screeches to a halt just before the end of the runway, flares too high and drops in. And, finally, there’s the “drop, stop and flop” method—usually when a taildragger lands too fast, doesn’t get the stick back and noses over onto the prop. Ouch!

It’s painful but fun to watch these landings, and we expect them from student pilots, but when the contract King Air pilot or proficient Cirrus pilot has a hard time doing a visual approach and floats two-thirds down the runway before touchdown, you have to wonder—what’s going on? 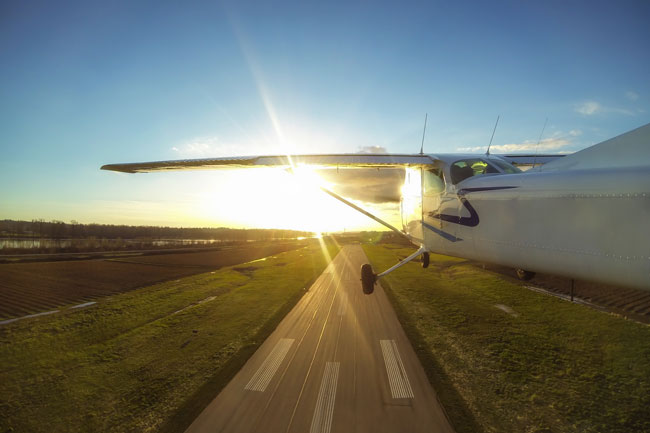 Should landings really be so random? Maybe I’m just a picky flight instructor, but I don’t buy into the saying “any landing you walk away from is a good one.” A better mantra would be “any landing you touch down on a predetermined spot just above the stall speed is a good one.” I find it perplexing that so many pilots, pros and weekend fliers alike, who are so meticulous in their approach to aviation, accept a level of randomness when the rubber meets the pavement.

There are a lot of good reasons to pick a spot and land on it every time you land. Landing precisely demands a level of control and discipline, and the challenge pays off. Landing accidents account for about 30% of all general aviation accidents and bend hundreds of airplanes each year. These are generally Loss of Control accidents—think fast approach, float down runway, force airplane on, and lose control, being a common problem. But perhaps the best reason to pick a spot and land on it is that you might need to do it someday on a short runway, a taxiway or a road. If you ever have an engine failure, you better know how to slip your airplane to the exact point you’ve picked out because it could mean the difference between survival or not for you and your passengers.

My favorite bible on aviation is a small leather-bound 1943 manual simply called “The Student Pilot Handbook,” written by Jack Hunt and Ray Fahringer. Short, concise and full of flying wisdom, if nothing had ever been written about learning to fly since then, we’d all still have good fundamental pilot skills.

Quoting from the chapter “Normal Landings:” “Landing an aircraft is one of the simplest maneuvers that will be accomplished. The first rule…is to remember that consistency and accuracy depend upon the use of a normal gliding approach and a smooth positive leveling off absolutely void of any quick impulsive application of the controls….” On airspeed control: “As the aircraft glides closer to the level of the landing field, it is slowed down as is done in the approach to a power-off stall…. The chief objective is to accomplish a completely stalled attitude of the plane just as the aircraft is about to make contact with the landing surface.”

Let’s agree that a smooth, consistent approach leads to a smooth, consistent landing. One of the biggest mistakes pilots seem to be making is carrying too much speed on final, but airplanes are certificated and designed for a normal approach speed of 1.3 VSO in calm conditions. Part 23 of Title 14 Code of Federal Regulations (14 CFR) deals with aircraft certification states “for normal, utility, and acrobatic category reciprocating engine-powered airplanes of 6,000 pounds or less maximum weight, the reference landing approach speed (VREF) must not be less than the great of VMC…with the wing flaps in the most extended takeoff position, and 1.3 VSO. So 1.3 VSO is minimum flight speed in landing configuration.

Obviously, we’re careful about being too slow on approach, but years of research, analysis and flight testing stand behind 1.3 VSO. Do you know what that number is for the airplane you fly?

Here are my picky flight instructor suggestions for ways to improve your landings:

Know your 1.3 VSO. If you’re guilty of approaching the numbers too fast, slow down your approach. Practice at altitude. Dirty your airplane up with gear and flaps, and using a long road or other landmark practice a steady descent at slower speeds.

Stay coordinated. The dreaded base to final approach stall is caused by skidding into the turn. Remember, the airplane will lose lift and performance when it’s not coordinated, and if it does stall, won’t stall straight ahead. Staying coordinated, with your butt in the middle of the seat, will keep you much safer when low and slow and give you the best performance for a go-around.

Learn to slip. Most airplanes can be slipped with flaps, but check the POH for your particular airplane. A slip doesn’t have to be aggressive or dramatic. It might just be a little application of rudder to help your descent rate. Keep the nose steady, and don’t forget to add opposite aileron to stop the airplane from turning. I like being high on approach because it gives me options for mistakes, a go-around, etc., and I know I can always put a little rudder in it to bring me down. Also, if you’re high and lose your engine, you can always slip to just the right road or field…basically, you can never be too high.

Keep the airplane tracking down the centerline. The centerline will give you the maximum room on either side in the event of drift.

Always pick a spot to land, and pick the spot close to the approach end to allow for error if you do float farther down the runway. There’s nothing comfortable about seeing the runway fly by underneath you while you’re trying to land.

Think of landing as a three-step maneuver—approach, level off and landing. Even with the perfect approach speed, as you level the airplane off a few feet above the runway in a slightly nose-high attitude, there will be some float due to ground effect, especially in a low-wing airplane like a Baron or an A36 Bonanza. The touchdown follows as you descend very slowly to where the ground rises up to meet you into a perfect touchdown every time. This is basically the same technique as a glassy water landing in floats—not sure where the water (runway) actually is? Level the airplane off above it, slow the rate of descent to 50 fpm and let the water (ground) come to you. Besides, if you’re only 2 or 3 feet above the runway and the airplane stalls and drops in, who cares? It’s ready to land at that point. This technique is so good and consistent it feels like cheating!

And, finally, watch other people land as often as you can. You’ll learn a lot from their techniques and mistakes.

Sometimes we just “arrive” rather than “grease it on.” That’s life, and we can’t be too hard on ourselves. But at least we can try to improve our technique and skill. Obviously, after flying for over 30 years, I’ve made almost every mistake in the book, and have made up a few new ones, but I keep trying to get better and more consistent. And, let’s face it, whether you’re a pro or a weekend flier, accepting random performance in any part of your flying is never good enough. Make every landing like you would with a hundred thousand of your best friends watching you land on the green dot at Oshkosh.