For most pilots, the quintessential Cherokee always has been the Archer. Yes, there’s still the Warrior, and there were the 140, 150, 160 and Cadet before that, but the Archer always has represented perhaps the most generic of the Cherokees. Just as the Cub was the signature general-aviation single of the ’30s and ’40s, and the flawed but beautiful V-tailed Bonanza dominated the ’50s and ’60s, the Piper Cherokee has become one of the most recognizable aviation icons of the ’70, ’80s and ’90s, hardly the fastest or the most comfortable, not the most efficient to buy or operate, but an outstanding combination of talents nevertheless.

For reasons only Piper understands, the company abandoned the Cherokee name a while back and still seems to bristle a little when someone refers to the Warrior, Archer, Arrow and now-discontinued Dakota as Cherokees. By any name, the PA-28s have nothing to apologize for. Some 30,000 of the four-seat Pipers were built in the last 40 years, and the type has served as both a gentle trainer and talented transport.

Today, the Cherokee 180/Challenger/Archer soldiers on into the 2000s, a familiar platform now fitted with an avionics suite to die for. Specifically, the 2004 Archer III on display at this year’s EAA AirVenture sported a new, dual-tube Avidyne Entegra primary flight display/multi-function display (PFD/MFD). It’s probably more than coincidence that New Piper chose to introduce a glass-cockpit Archer at about the same time Cessna premiered its new Garmin G1000 Skyhawks, proving, as usual, that competition is good for everyone.

Base price for the Archer III is $211,600, which includes a Garmin stack of a 430 com/nav/GPS system, a 330 transponder with traffic uplink, a 340 switching panel, including beacons, and the usual Telex mic and headset. The premium upgrade (known as option 598) costs $34,950 and adds the second 430, an STEC autopilot, a carb-ice detector and full leather. Stepping all the way up to the Entegra flat-panel display boosts price by almost $50,000, but includes the PFD, MFD, second 430, STEC 55X autopilot, EMAX Engine Indicating System, fuel totalizer and weather data uplink. This puts the Archer in direct competition with Cessna’s Skyhawk SP, fitted with the Garmin G1000 of comparable talent.

Despite the dramatic, philosophical difference between the Archer and Skyhawk SP (the variation in wing placement gives the two types distinctive looks and slightly dissimilar landing characteristics), it’s a little surprising how similar the two models are in specs and performance. Both types originated more than 40 years ago, and the basic design hasn’t changed much since then. The two models use wings of nearly identical area and Lycoming engines of the same horsepower (although the Cessna’s is injected), with gross at 2,550 pounds, stall below 50 knots, cruise within four knots of each other and nearly the same payload. The Archer and Skyhawk have consistently flown with similar handling and enthusiasm, and the recent introduction of the Skyhawk SP has made the two airplanes head-to-head competitors.

The recent dramatic improvement in avionics technology has introduced a new class of pilots to instrument, navigation, weather and traffic-detection capabilities previously reserved for the military, corporate aviation and the airlines. Install an Avidyne in an Archer, and you magically transform the airplane’s personality from basic to business. Archers always have been excellent personal airplanes, but somehow, the Avidyne system seems to qualify the model for corporate use, if over limited distances and at modest speeds.

The new world of PFDs/MFDs has caused a revolution in the industry, bringing a startling level of avionics technology to the lower rungs of general aviation. The current generation of pilots, raised on the best efforts of Apple and IBM, will take to the computerization of aviation without batting an eye, whereas some of us older types, accustomed to looking at analog instruments, will find the transition more of a challenge. Electronic instruments and navigation readouts are unquestionably the wave of the future, however, and those pilots who can’t adjust will simply be left behind, as even the least expensive airplanes in the industry embrace the new electronic marvels.

If the Archer’s avionics suite is as modern as tomorrow, the airplane it serves remains the simple, reliable old friend it has always been. Like thousands of pilots who have been flying for a while, I’ve logged my share of hours in Archers, and if the type isn’t the most exciting machine in the sky, it makes a durable, predictable rental, an easy checkout in distant locations and a comfortable airplane to fly in IFR. 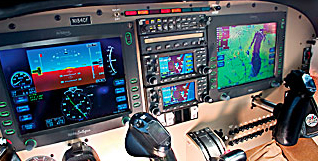 For this report, I flew with New Piper’s Stan Ryker out of Oshkosh, Wis., on the day after the EAA AirVenture 2004, and the PA-28-181 proved, once again, what a forgiving and friendly machine it is. The cabin is 42 inches across up front by 45 inches tall, and Stan and I had reasonable room for elbows and headsets. The airplane’s creature comforts are easily adequate to the class, especially with the optional leather seats.

In flight, the Archer couldn’t be much easier to fly. My first takeoff was in formation on Plane & Pilot’s Skylane photo ship, and the Archer was a comfortable machine to snuggle up with the Cessna. Some instructors have complained that Cherokees are too safe and easy to fly. It’s true the type is almost silly-simple to operate, but it’s hard to consider that a deficit under any conditions.

From its inception in the early ’60s to the new airplane I flew, the 180-hp Cherokee has remained true to the concept that simpler is better. The engine is still carbureted, the flaps remain manual, the prop is fixed and the basic airplane is very much the same machine it has been since Piper switched from the Hershey-bar wing to the semi-tapered Warrior airfoil in 1976.

Change can add capability, but it doesn’t always improve the breed, and with the exception of the avionics suite, the folks at New Piper have left a reliable formula alone. That’s not to suggest the Archer is outdated (although it does look fairly antiquated when parked next to a new Diamond Star or Cirrus SR-20), but merely that it’s a design that has matured gracefully. Piper continues to sell 75 to 100 of the type each year, not really all that impressive by the standards of 25 years ago, but enough to justify continued production on today’s more restrained market.

The Archer’s max gross weight is 2,550 pounds, which positions the model directly opposite Cessna’s Skyhawk 172S. A standard airplane weighs in at 1,682 pounds, leaving a useful load of 876 pounds. Fuel remains 48 gallons usable, so an entry-level Archer sports a full-fuel payload of 588 pounds. While that’s not quite enough for four folks and full fuel, it’s an easy three plus baggage. Many Archer owners fly most of the time with only two up front or with two adults plus kids in the back, and the Archer flies such missions willingly.

New Piper hasn’t yet embraced FADEC on the Archer, meaning there are still two knobs on the power console, throttle and mixture. For most flights below 3,000 feet, you can set the mixture to full rich and forget about it. With a power loading of more than 14 pounds per horsepower, takeoff doesn’t happen in a rush, although the airplane lifts off in a little more than 1,000 feet and starts uphill at a reasonable 600 to 700 fpm. While Archers have never been touted as short-field airplanes, they’ll operate from 2,000-foot strips with ease, even with short obstacles to clear.

There’s little reason not to use max cruise virtually all the time in an Archer, and that means endurance is about four hours plus reserve, as long as most pilots (excluding ferry pilots) are willing to sit in an airplane anyway. According to New Piper’s specs, max cruise is 128 knots, but most owners block the airplane at 115 to 120 knots at 8,000 feet, 110 knots up at 11,000 feet. High cruise allows the airplane 450 nm between fuel stops. Pulling back to 55% only adds 75 nm to range, so there’s little justification for using lower power settings, unless you’re short on fuel or a high cruise altitude demands it. The service ceiling is 14,100 feet.

The essence of the Archer always has been its ability to transport its pilot and passengers with stability and a minimum of fuss and complexity, and that talent remains to this day. The airplane may be the same formula as of old, but it never fails to provide a pleasant flying experience.

Back in the ’70s and ’80s, I flew about two dozen new Warriors, Archers and Arrows across the Atlantic for Globe Aero of Lakeland, Fla., and although the trips weren’t always fun, flying through northeastern Canada in mid-winter, I felt I could rely on the little Cherokees, especially the Archer. clouds much of the time, and the Archer made a good instrument platform. I once saw a new PA-28-181 land at Reykjavik, Iceland, and taxi onto the ramp with a full inch of ice on the wings—no one’s idea of a good time. The pilot reported he had been in and out of icing for the last several hours, but since there’s nowhere to divert between Greenland and Iceland, he had little choice but to keep on plugging. The airplane flew reasonably well despite the temporarily deformed airfoil.

Like the Cessna Skyhawk that seems ageless (it will be 50 years old in 2006), Piper’s Archer is one of those airplanes that just may be around forever. It offers entry-level buyers a little of everything that pilots look for in a flying machine. Now, with the introduction of the Avidyne Entegra flat-panel display, the reliable Archer has assumed a level of sophistication it never had before.