Shortly after I purchased my first airplane in 1968 (a Globe Swift), I shared an executive hangar with a Ryan PT-22 and a Big Yellow Stearman, the latter owned by a retired Pan Am captain. Yes, it was one of those Stearmans, a totally restored prize winner, a perfect example of time standing still. It was as perfect as unlimited money and several thousand hours of TLC could make it. Doug was fanatical about his airplane and also given to a certain amount of whimsy.
I rode with him several times, but they were always rides, not flights, as he’d conveniently removed the front stick, so no one else could actually fly his airplane. As it happened, his Stearman’s registration was N22747, and Doug, characteristically irreverent, took every advantage of the N-number.

He flew the airplane regularly, and said he delighted in contacting approach control at Long Beach, called simply SoCal in those days, and announcing, “SoCal, this is Boeing 747 at the east tip with Oscar. We’d like the ILS to Long Beach.”

Doug chuckled that the controllers were always amazed when they assigned him a discrete squawk and identified his airplane on radar, flying the approach at 70 knots. The next call from ATC was usually something like, “Say again type aircraft.”

These days, I have another friend with an equally pristine Boeing Stearman, Mike Hanson of Westminister, Calif. Hanson doesn’t fly many ILSs in his Stearman, real or practice, but he and his vintage Boeing model 75 are a common sight in the skies over Southern California. His airplane is a fully restored Navy N2S3 trainer, a 1943 model, one of the 10,346 built by Boeing as primary flight-training machines during World War II, and used all over the world as a military trainer. Since the airplane never saw combat, there was little to demilitarize after the war, and thousands of Stearmans were sold as surplus.

Hanson is a roofing contractor by trade, and as he admits, he came by his classic airplane in perhaps the best/worst way possible. He inherited it. “I had a good friend in the early 1990s who owned this airplane and a Bonanza,” Hanson explains. “He dearly loved his Stearman. When he died a few years later, he willed it to me, and suddenly, I became caretaker of a treasured piece of aviation history.”

Since then, Hanson and his wife, Kendle, have established their own freelance barnstorming business (www.biplanefun.com) out of Compton, hopping rides above the spectacular Palos Verdes coastline. The Hansons have logged some 2,000 hours in their classic Boeing in the last 13 years.

Unlike some antique flying machines that seem to sit in their hangars, the Stearman isn’t a shop queen. Hanson reports maintenance hasn’t been that difficult, partially because of the number of airplanes still on the registry.

Lloyd Stearman created the first Stearman in the early ’30s and subsequently sold his company to Boeing. The then-Wichita-based company later won the contract to provide basic trainers to the Navy and Army Air Force, and the Stearman (sometimes branded by students as the “Yellow Peril”) was the airplane of choice. The model 75 had spruce wings, tube-steel fuselage and fabric covering, and was considered dramatically overbuilt for its mission, so well constructed that back in the mid ’30s, each airplane cost just over $11,000 to produce (in contrast to a Beech Staggerwing B17L that sold for $8,000). Translated to today’s dollars, you could probably buy a decent used Lear 23 for equivalent money.

Stearmans were fitted with a bewildering variety of radial engines, everything from Continentals and Jacobs to Lycomings and Wrights, ranging in hp from 220 to 420. Mike Hanson’s Stearman Kaydet features the original seven-cylinder Continental, rated for 220 hp.

After the war, the airplanes were pressed into civilian service and modified as necessary with such improvements as wheel pants, a cowling and speed fairings. These were employed as barnstormers, air show/wing walkers, mail planes and a hundred other jobs, some retrofitted with the huge Pratt & Whitney R-985 engine, boosting power to 450 hp. Hundreds of Stearmans were converted to crop dusters by simply mounting an aerial applicant tank up front and spray booms beneath the wings.

Hanson’s airplane, like many of the early Stearmans, was equipped with a wood prop that provided limited performance. Hanson flew with the wood blades out front for the first thousand hours. “I call those the ‘good-for-nothing’ props, in between good climb and good cruise,” says Hanson. He later retrofitted his airplane with the ground-adjustable all-metal McCauley prop, and picked up 10 knots cruise. (A Hamilton-Standard also is available.)

That’s not to suggest cruise was a Stearman strong point, whatever the prop. With the drag of two open cockpits and accompanying wind shields, guy wires, struts, landing gear and two fat wings hanging in the wind, the Stearman has all the aerodynamic sophistication of a boxing glove. It’s surprising that the stock Stearman managed the speed it did, about 90 knots. With 43-gallon tanks topped and a burn of 13 gph, the Kaydet has 2.5 hours endurance plus reserve at max cruise, enough for 230 nm range.

The airplane has a baggage compartment behind the aft pit, approved for up to 60 pounds. Typical useful load was about 750 pounds. Hanson’s payload works out to a generous 492 pounds, two big folks and all the luggage you can stuff inside the baggage area.

With two wing walks, you can climb aboard from either side, but tradition suggests you treat the airplane like a thoroughbred—mount from the left. Step up on the wing, throw a leg over the sidewall, step down onto the seat and ease your rear end into the chute/cushion.

Taxiing with that big radial engine straight ahead requires the usual S-turns to clear the taxiway. Fortunately, that’s an easy process (at least, it was on Hanson’s airplane) with the steerable tailwheel and good toe brakes. Pivot the Stearman back and forth, and alternate looking out the left side as you pivot right and vice versa to see what you’re about to hit.

Hanson and I launched from Compton with smoke on and another Stearman in loose formation. The tail flies up quickly, and the procedure is to balance the airplane on the mains.

We headed out to the practice area in the Catalina Channel off Long Beach. Flying at what was probably near-gross weight, the Stearman managed about 500 fpm at a cruise climb of 75 knots.

As Hanson had advised me, “On paper, there are far better airplanes, but I think you’ll find there’s just something about a Stearman.” He was right. The Kaydet flies lighter than it looks. I had anticipated heavy controls and plenty of adverse yaw, but rudder requirements didn’t seem excessive. Normal turns left and right were gentle and not especially exciting, but that’s exactly what you want in a military trainer.

If you’re riding front pit as I was, there are brace wires and struts ahead that correspond with 35 and 60 degrees of bank, respectively. Wrap the horizon over to 60 degrees or more, however, and you’ll find you need far more nose-up pitch than you imagine to hold altitude. I did what I thought was a nice, steep 360 with the nose barely above the horizon—and promptly lost 200 feet. No VSI. Oops.

Stalls are a non-event, with no tendency to roll over the top and spin in either direction unless you insist on it. I didn’t. Departure stalls offer no surprises. In fact, the Stearman is nothing if not predictable.

No matter how enthusiastically you fly the airplane, rest assured it will take more than you will. During my flight with Hanson, I flew some gentleman’s aerobatics, several roll/loop/hammerhead combinations with a max four G pull, and the airplane soared right through them without complaint. It’s also approved for snap rolls, spins and all combinations in between, Cuban eights, loops with a snap on top and most other inside tricks. My acro certainly wasn’t all that proficient, but the Stearman did its best to make me look good. That’s exactly the idea.

The Stearman’s roll rate isn’t especially impressive with ailerons on the bottom wing only, probably about 50 degrees/second. Another set of ailerons on the top wing is a common mod that would boost the roll rate for air show application.

Landings were always a challenge in Stearmans, especially for flight cadets struggling to master the big biplane before moving on to the AT-6/SNJ. The Kaydet sits tall on its stout main gear, and the three-point attitude is so steep, standard technique is to wheel it on in a reasonably level stance; then, lower the third wheel to the ground once you’re sure the runway ahead will remain clear. Hanson has over 2,100 hours in his N2S3, and prefers wheel landings over three point touchdowns.

With no flaps to lower the nose and slow the approach, Hanson likes to cross the fence at 70 knots and plans a flat touchdown at about 55 knots. “The Stearman is a dream to fly, but for most people, it’s a nightmare to land. Far better Stearman pilots than I have groundlooped the airplane, so I try to always be VERY careful on landings,” says Hanson.

The Stearman is certified to withstand +12/-9 Gs. As a frame of reference, consider that’s well above the limits for the current F-16 fighter. Such strength made the Kaydets tough trainers during World War II, willing to endure the worst that pilots could inflict.

The story goes that two military instructors at a World War II training base in East Texas decided to test the Stearman’s strength. They were deadly bored with the job of educating cadets to the ways of the sky in Boeing Kaydets. Their assignment was especially frustrating, because they knew many of the young men they were training would soon be flying fighters against the Germans, exactly the duty they longed for.

The two instructors were assigned to do a return-to-service check flight on a recently repaired Stearman, and hatched a plan to have a little fun. They climbed to 10,000 feet just off the Gulf Coast, completed their basic flight tests and determined the airplane was basically sound.

They trimmed the Stearman for straight and level flight at full throttle, then rolled inverted and pulled through to a vertical dive. When the airspeed was maxed out, prop tips screaming beyond Mach 1.0, the front pilot nodded his head (no intercom in those days) and both instructors simultaneously pulled back on their respective joysticks as hard as they could.

When they came to, the Stearman was placidly chugging along straight and level, totally undamaged. 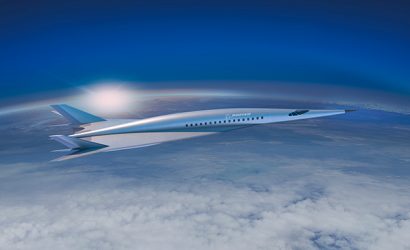