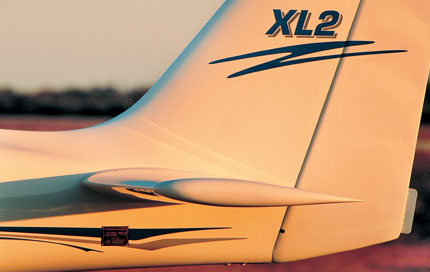 What would you do with a successful two-seat, kit-built airplane? Some folks would be happy to just bask in the glory of it. Others would think about a new model at some point, or a different engine, or even a fast-builders program. But this path was no good for Tony Tiarks, the CEO of Liberty Aerospace.

If you’re Tiarks and you have the two-seat Europa as a starting point and a penchant for sword fighting with windmills, the answer is easy. Just take on the certified aircraft builders on their own turf. Others have done it with fast four-seaters loaded with technology. So Tiarks figured there must be room for a simple two-seat trainer that can be sporty and fun as well. To get there, all he needed to do was jump the certification hurdle.

For any design, the road to certification is a long one. For the Liberty XL2, it started 18 years ago as the Europa, a popular kit airplane with versions flying in Europe, the U.S. and even New Zealand. Tiarks saw a chance for something different. He says, “We’ve delivered over 1,200 airplanes, so we know how to build airplanes. In 1998, I perceived an opportunity in the certified market. What we didn’t know was the FAA certification process. I was convinced that if we could certify the airplane, the market would be large. On the whole, the certification process is a straightforward series of system approvals. Now that we’re done, the Liberty XL2 meets the latest, highest bar for development.”

Even with a good basic design to start with, Tiarks and his legion at Liberty Aerospace had to virtually re-design the entire airplane. “From the very beginning, we did not want to compromise safety in any way. We wanted to exceed FAA standards, not just meet them. Plus, we wanted to emphasize a few things, like ease of maintenance and a simple, robust construction process. We decided to use the most appropriate materials for a particular part of the airplane. For instance, the fuselage is still carbon-fiber composite, strong, light and easy to make. The wings, however, are aluminum. It’s easy to make a strong single-spar wing out of aluminum, and we have a clever way of putting them together. The cockpit is wider and more comfortable than the legacy Europa. More importantly, we have reduced our building process to the point where we can roll the airplane out the door with only 150 man-hours in order to put it together.”

Insurance is a big factor in any airplane purchase decision, and Liberty has paid close attention to it. “We figured that the insurance industry would acknowledge the simplicity of our building process and that rates would reflect how easy it would be to repair an airplane if it were damaged. The XL2 is a crashworthy design, and that enhances safety considerably. More importantly, it should make the customer feel more secure when they fly the XL2. We think that the customer also will like the high standard of our interior and our new curing process for the fuselage that allows us to offer some choices in color other than white,” comments Tiarks.

Color choice is one thing, but the heart of any airplane is the engine. The most important factors affecting performance from an owner’s perspective are horsepower to fly the airplane and fuel to keep it going. Both have the potential to get expensive quickly and both are areas in which the XL2 shines.

Liberty chose the new Continental IOF 240-B to power the XL2, and it’s an interesting choice. Small four-cylinder engines typically last a long time, but this one has a twist. It has fuel injection and what is known as Full Authority Digital Engine Controls (FADEC). The FADEC system allows a 2,000-hour TBO and makes engine operation dead-simple. Flip the battery switches on and turn the key like you start your car, and the engine springs to life. Only one power lever, located on the central console between the seats, operates the engine throughout the envelope.

Set the power you want, and the FADEC does the rest. The FADEC compensates for altitude and even monitors the health of the engine. All you have to do is choose your speed. Tiarks feels that “the public will recognize the desirability of the first engine certified with a full FADEC system. We’re expecting high reliability and low maintenance costs.”

The performance numbers for a 125 hp engine are impressive. A 75% power cruise with its new wheel fairings comes out at 132 knots indicated at 5.5 gph.

Tiarks and Liberty have spent a lot of effort identifying their market. Tiarks says, “Our biggest customers so far are flight schools. With our low acquisition and operating cost, coupled with the rugged airframe, the XL2 is popular with fleet-based flight schools. At a base price of $139,500, we expect individuals to be our biggest customers. The specifics of this airplane really bring the possibility of ownership to people who couldn’t otherwise afford an airplane.”

The XL2 can economically fill the demand for airborne surveillance in an emerging sector of the light aircraft market dictated by homeland security. With operating costs barely $35 an hour, the XL2 can fly slow enough and cheap enough to replace helicopters as observation platforms over critically important urban areas.

Liberty has big plans for its little airplane. With the solid backing of a recent investor, they’re prepared for volume production of up to 250 airplanes next year. The parts supply basis could handle a production number over 500 a year. They’re aggressively opening sales offices from Santa Monica, Calif., to Europe. The future is bright and covered by a three-year warranty.

From a business perspective, Liberty has its act together. “Liberty is a strong team,” says Tiarks. “The designers, production, sales and marketing staff are absolutely brilliant. Our engineers are stars. Our goal is to exceed the customer’s expectations.”

Sometimes a good-looking airplane is not a responsive one, but flying the XL2 is more than enjoyable. It’s downright fun. There is no slop with the controls, and the airplane immediately responds to the lightest touch, which is achieved by a control system incorporating dual push-pull tubes for the elevator, rudder and the ailerons. That’s how they built military fighters before the dawn of electronic flight controls. The XL2 reflects the definition of positive response, and the mass balanced elevator adds to the silky, feather-light control feel.

Two interesting features of Tiarks’ design are the hinged wings and the wheel brakes. The wings can be removed or re-installed in minutes by utilizing an externally powered electric motor to unlock the wing pins. The system allows a whole new world of storage options. The brakes are located next to the throttle on the center console—after a few minutes of steering with your fingers, it becomes second nature.

Excellent visibility, speed and technology make this airplane a real sportster. Tiarks says, “Everyone who flies in it gets out with a smile!”