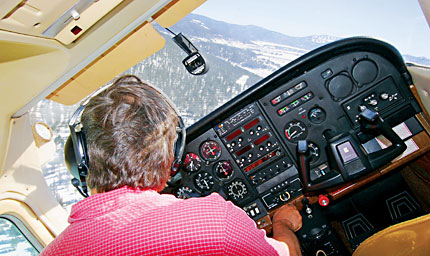 Face it, no one likes to admit mistakes. Probably because of the Superman syndrome, pilots are especially reluctant to acknowledge errors to authority figures. Aviators are even more reticent to confess to dangerous mistakes if they have passengers on board.

Mayday myths are many. Some pilots believe there’s a secret government agency that will triangulate any transmission you make on 121.5, track you down and arrest you if your emergency doesn’t fit special parameters. Others feel any emergency declaration is an automatic admission of guilt and, therefore, a one-way ticket to a FAR violation. Still others think the government will bill you for all emergency services.

Wrong on all counts. The universal emergency frequency, 121.5 MHz, definitely isn’t for frivolous use, but it’s specifically earmarked for anything you deem an emergency. Don’t worry about what anyone else might think. Chances are you’ll be moved to another frequency as soon as you establish contact anyway, so you probably won’t be on 121.5 for long.

Errors in judgment and even minor, inadvertent FAR violations usually are overlooked unless you recklessly put yourself, your passengers or other people at risk. Technically, the FAA absolves pilots of responsibility in emergency situations with FAR 91.3(b): “The pilot in command may deviate from any rule of [Part 91] to the extent required to meet [the] emergency.” That’s not the get-out-of-jail-free clause it sounds like, but it does excuse FAR violations when they’re necessary to save the aircraft and passengers. If there’s paperwork to be done, the FAA most often does it. They may sometimes request a report on how your emergency developed, but that’s usually the end of it.

Similarly, unless you’ve done something incredibly stupid or illegal, emergency search-and-rescue (SAR) services are most often examples of your tax dollars at work. The U.S. government and those of most other International Civil Aviation Organization (ICAO) signatory countries don’t normally bill for emergency services. They may, however, impose special requirements on pilots flying in their airspace. (Transport Canada, for example, requires an equipment inspection and that pilots pass a written and aural test before allowing them to operate single-engine aircraft across the Atlantic.)

If you’re flying VFR underneath, the clouds come down and you’re forced to climb through an overcast to on top without a clearance, that’s an emergency. Technically, you’re not in violation of the FARs, although you could have a lot of explaining to do as to how you got into that situation in the first place. If you have the time and know your position, you should let someone know what you’re planning before you ascend so a controller can clear the airspace above.

The more common mistake is the opposite—becoming trapped on top. You’re flying along above scattered clouds when suddenly the undercast turns broken, then overcast before you can think about descending. If you’re not instrument-trained, this can be a definite emergency, and it comprises a large portion of the FAA’s maydays.

By far, the major area of emergency aid lent by the FAA is related to lost pilots, roughly half of all “assists.” Weather problems account for another 10%, and mechanical problems—rough engines, malfunctioning systems and avionics—comprise another 10%. Perhaps surprisingly, low-fuel situations account for only 5% of assists. Oftentimes, low fuel may be combined with other factors, such as an uncertain position or VFR on top.

The best ad-vice is call for help before you face a situation beyond your control. Excluding some me-chanical as well as electrical problems, emergencies rarely happen in a rush. They take time to evolve. If you’re smart enough to catch them early, you may be able to solve the problem before there is one.

Advertisement
A few years back, I was ferrying a Maule M7-260 on Wipline amphibious floats from the factory in Moultrie, Ga., to Glasgow, Scotland. On the final day of the trip, I launched early out of Reykjavik, Iceland, for Glasgow. Two and a half hours and 250 nm out, the engine began to run slightly rough. I tried carb heat, leaning more or less, adding or reducing throttle, switching back to the main tanks, switching on the fuel pump. Nothing helped. The clouds were descending toward the water and so was I in an attempt to stay out of the ice. Dropping through 2,500 feet, I finally decided that I had had enough, so I switched to 121.5 MHz and put out a mayday call to anyone on the frequency. The engine was becoming progressively rattier. A British Airways 777 was overhead and relayed my mayday to Scottish Control.

Within about 30 minutes, a Lockheed Jetstar joined up with my little Maule, making huge circles around me at 1,000 MSL. We were both barely beneath the clouds as I struggled on toward Stornoway, Scotland. The engine continued to run rough, but it didn’t seem to be getting any worse. As I closed with Scotland, a large SAR helicopter formed up with me, and the Lockheed waggled his wings and returned to base. The SAR folks confirmed there was a swimmer aboard the chopper in case I went into the water. (The fact that the Maule was on floats was no comfort, as winds on the water were about 30 knots, and the waves were running 20 feet at the crests.)

As the northern coast of Scotland came into sight ahead, the engine began to smooth out. By the time I crossed the beach, the Lycoming was functioning normally and the weather began to lift. The helicopter landed with me and followed me to the ramp. The media had two hours to prepare for my arrival, so I spent the next two hours on local and BBC-TV.

The airplane went into the shop, and the mechanic didn’t find anything wrong. Yes, that did make me feel like an idiot, but the problem had been real enough for two hours.

I maydayed again on a flight from Japan to Germany via the Pacific. After transiting through Guam and Majuro, I was on the 2,000 nm leg to Honolulu in a late-model Mirage when a ferry tank began to leak and fill the cabin with avgas fumes. As it happened, I was just coming up on Johnston Island, 700 nm southwest of Honolulu. In those days, Johnston was a top-secret U.S. Navy base, but “mayday” was the magic word for permission to land. Again, I tried to dance around declaring an emergency until the controller made it clear what was necessary.

After I had described the strong smell of fuel in the cockpit, how I had depressurized and descended to 10,000 feet, was breathing with my mouth near the storm window, complained that I couldn’t possibly make it to Kauai and generally told the controller everything except what he needed to hear, he prodded me with, “Sir, you have to say the words.”

“Roger that,” said the controller. “You’re cleared for any runway. Would you like the equipment?”

It was as simple as that. Once I was on the ground, a Jeep full of Shore Patrol sailors met me and made certain I didn’t leave the vicinity of the airplane while we checked out the leak. Once they verified that the problem was real, they allowed me to fix the leak, refile my flight plan, have a Coke and sandwich and go on my way. They made it clear I wasn’t in trouble, but that I had to leave. Those without a need to know weren’t allowed on Johnston. I did give them my name and pilot’s license number, but I never heard any more about the incident. (Still, I sometimes wonder if somewhere back in Washington, there’s a file with my name on it.)

It’s always difficult to understand why pilots fail to ask for help when they’re “temporarily disoriented” (read “lost”). Again, the mentality seems to be “don’t ask, don’t tell,” either in accidental IFR or with an unknown position. Some pilots would rather drone around in the clouds or search for an airport alone rather than admit their mistakes and request assistance. It’s especially critical when a VFR pilot inadvertently stumbles into IFR conditions without the benefit of proper experience or training.

Most of the time, the famous five C’s (climb, communicate, confess, comply, conserve) may help you out of trouble. Climb to clear any unknown terrain, improve radio range and increase the possibility of a DF steer (should you need one). If the weather is VFR, climbing also may help you see prominent landmarks not visible at low altitude. If you’re in IMC conditions, climbing may allow you to pop out the top so that at least you can more easily maintain wings level.

Communicate on any frequency where there’s a helpful ear—center, flight service, tower or even a local unicom. If you have no other choices, try 121.5 MHz. In the hinterlands at relatively low altitudes, you may reach an airliner, corporate jet or some other aircraft whose crew can relay for you.

Once you’ve established contact with someone, confess and tell them everything they need to know. Don’t hold back any details about your situation, no matter how embarrassing they may be.

Don’t be reluctant to comply with whatever instructions you’re given, but evaluate any advice in the specific context of your situation. While this may be your first emergency, the controller may have worked many of them, but that doesn’t mean he automatically has all the answers. He’s there to help, as long as his advice makes sense.

The final C stands for conserve, and that obviously refers to stretching your fuel supply to the max. Someone on the ground may be able to help you, but it could take time, and you may need to optimize your endurance to take advantage of any help that’s available.

If there’s a universal message, it’s this: Don’t be afraid to declare an emergency, and do it sooner rather than later. The worser you allow the situation to become before asking for help, the less likely it will be that anyone can offer any help.