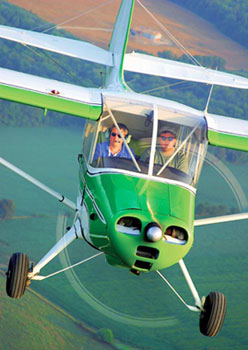 The Sedan wasn’t the only low-end four-seater; Piper had the Pacer, and Cessna was producing the 170. The Sedan was simple, rugged, easy to maintain and fly, and relatively cheap. If you had $4,795, you could fly a brand-new Sedan out the door. In its three-year production span, 561 Sedans took to the skies.

The Sedan did have a few characteristics that distinguished it from the pack. It had huge internal volume—with only the pilot aboard, there was 100 cubic feet of space. The big metallized wing produced enormous lift, qualifying the Sedan as a short takeoff and landing (STOL) aircraft. It was STOL before STOL was cool. Rugged and flexible, it was pressed into service as a bush airplane, flying loads into and out of the backcountry on skis and floats all over the continental U.S., Canada and Alaska.

A capable airplane, this darling of bush pilots was soon employed in an unusual academic research program in the early 1950s. Two University of Alaska students outfitted a Sedan with radio gear and flew the airplane 300 feet above the ground all over Alaska. Logging over 20,000 miles, they produced a conductivity map of the entire state. Their study served as the foundation of research on magnetic storms, which affect everyone on Earth.

A few years ago, another unusual story about the Aeronca Sedan surfaced. It seems a 93-year-old aviator was delivering newspapers out of the window of his Sedan. Being used on a newspaper route can only enhance the Sedan’s reputation as a docile, easy-to-handle airplane, but don’t complain about late papers.

A lot of folks are still flying and restoring Aeroncas. Organizations like the National Aeronca Association and the Fearless Aeronca Aviators try very hard to keep it that way. The Fearless Aeronca Aviators figure there are 208 Sedans still registered in the United States. Some flying on floats in New York state, some on skis in Canada. Other, more capable aircraft have replaced the Sedan as money-making bush airplanes, but it’s still going strong as a fun machine. In fact, the first one built graces the skies of Wisconsin on a regular basis.

Scott Mumm and his wife, Joann, owners of the first production Sedan, live on a small farm near Brodhead, Wis. With a vacation house on the lake in the northern part of the state, a long day’s drive by car, they needed a way to get the family and their stuff there easily. Scott explains, “I saw a Sedan and knew that was the airplane I needed and could afford. It has a big wing and it was made as a seaplane.”

Scott bought the airplane precisely for all its good qualities. “I’ve got a grass strip at my house that is fairly short, and everything I own is a two-seater. With my wife and four kids, I figured I needed something bigger. I looked at Stinson 108s, the Cessna 170, Pacers and even Cessna 180s. None of them matched the Sedan for price, load and operation costs.”

“A friend of mine was on layover in Florida when he found N1000H, the first production Sedan, in a hangar,” continues Scott. “It had about 1,200 hours on it and was in pristine condition. In fact, the paint is original. I have several original Aeronca pamphlets that show this airplane with this paint scheme. My friend called me and I bought it, sight unseen. My dad flew down to pick it up and bring it home.”

Scott has a close relationship with his father, and flying is something they share. But it wasn’t always that way. Like most teenagers, Scott grew up with a problem. From his perspective, it was an insurmountable problem: He knew he was born to fly, but his parents weren’t thrilled with the idea.

Scott’s father, a pilot for United Air Lines, and his mother forbade him to fly. Scott couldn’t accept that, and for him, rebellion took the form of flying lessons. He had to work at a gravel pit to pay for his flying, but fly he did. Scott wasn’t the only one in the family who was bitten by the flying bug. He and his brother, Randy, both soloed on the same day. Randy went on to become a tower controller for the FAA. Scott stayed in the cockpit.

Scott worked his way through college as a certified flight instructor. He climbed his way up the civilian ladder, eventually flying for American Airlines. Along the way, he served a stint in the Air National Guard flying A-10 Warthogs and C-130 turboprops. Regarding the Reserves, Scott says, “It was fun flying, but after a while, I just couldn’t handle three jobs at once. The A-10 was a hoot. The C-130 was like flying a football—it’s not graceful, but it was fun to try and fly it well.

“I just like to fly. The Sedan is great for going to the lake and carting my family around. It almost pays me to fly it, but I’m thinking about getting another fun two-seater to put in the hangar. A friend of mine has a Stearman and that is a really fun airplane. As long as there is an airplane nearby, then I’m okay!”

Scott’s Sedan is a classic airplane that never really got a chance at the spotlight, and to make matters worse, very few appreciate its good qualities today. Bar none, the most recognizable Aeronca is the Champ. Produced in the thousands, it was used as a trainer and as an observation airplane by the Air Force in World War II. The Champ proved to have unbeatable genes. Bellanca evolved the aerobatic Citabria and Decathlon from the Champ. American Champion continues to make several versions of the airplane—all brand-new. By any measure, the design is a success. Unfortunately for Aeronca, the era of taildraggers was almost over when they began producing the Sedan. Piper has been in and out of the airplane business ever since. Cessna evolved its 170 into a plethora of other models and succeeded beyond imagination. Despite the promise of the Sedan, Aeronca got out of the aircraft business permanently.

Today, the Sedan is a sedate, graceful airplane that calls back to a time gone by. On one hand, it’s firmly nostalgic, and on the other, it still has a lot of utility and flight time left in it. Perhaps the Aeronca Sedan is best summed up by a phrase than an unknown Sedan aviator once said: It was “a wonderful dead end.”