“Everybody’s gotta have a little place for their stuff. That’s all life is about. Trying to find a place for your stuff.” — George Carlin

Stuff—we’ve all got it. We take it with us, everywhere. We take bags of it to work, to play, overnight, from room to room. We’ve got old stuff and new stuff. Stuff we can’t bear to give away and stuff we can’t wait to get rid of. We buy and sell it on eBay, give it away, receive it and re-gift it. We’re not like other species. We can’t do without our stuff.

I like my stuff nice and neat. I can’t bear to walk into a cluttered house or kitchen with counters covered with electrical appliances, mail, calendars or pottery cylinders filled with spoons. It clutters my mind. I want to start cleaning. Sometimes I do. Maybe it’s because I’m a Virgo, but I think stuff needs to be organized, with a special place for everything—books, shoes, dog supplies, scarves for a winter day.

Pilots are usually pretty organized. Their hangar shelves are neatly stacked. Even in the hangar that looks like a junkyard, the owner will generally tell you there’s no such thing as airplane junk and they know exactly where everything is. Same goes for my airplane, my cockpit and my flight bag. My flight bag has evolved over the years, but some items have remained standard. I carry one bag for my aerobatic airplane and one for my Bonanza, and never the twain shall meet. Each one serves and belongs to a different airplane. I take my flight bags seriously, like them immensely and organize them accordingly. 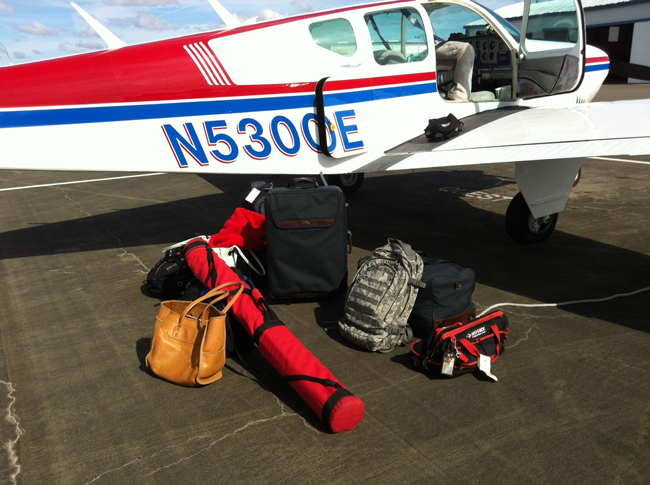 Flight bags have been an ever-present part of my life. My father, the airline pilot, was never far from his. It was big and heavy and made of leather. It was important-looking and made a statement. Its contents were always a bit of a mystery.

Early aviators didn’t carry flight bags. There wasn’t much to put in them. Charles Lindbergh and Anne Morrow Lindbergh flew their Lockheed Model 8 Sirius around the world without personal flight bags, just many other bags for supplies. The Air Mail Service pilots didn’t have flight bags, either, nor did they have room for them. They carried a kneeboard, personal photographs, beef jerky, tobacco and a pipe, but not a flight bag.

When did aviators start carrying around so much stuff? I think we can safely blame Elrey Jeppesen for this. Jeppesen was a barnstormer with Tex Rankin’s Flying Circus before getting hired by Boeing Air Transport, one of the earliest scheduled airlines, now known as United Airlines. Airline navigation in the 1930s was accomplished with Rand McNally road maps, train tracks and other natural landscapes—which is okay for today’s Pitts pilot, but not safe enough for the airlines. Since the accident rate at the time was pretty deplorable, and flying into mountains and bad weather were regular occurrences, Elrey got tired of losing friends and decided to do something about it.

He started charting the areas he flew, taking pictures and making notes, and by 1934, he launched Jeppesen & Company. He designed the first set of instrument flying charts, and in 1941, his company supplied the U.S. Navy with charts used in WWII. He left the airline to focus full-time on his company. Who’s to say that entrepreneurs were born yesterday? It was those Jepp charts that made my father’s and every other commercial pilot’s flight bag from the 1940s on so daunting.

My flight bag is a lot smaller than my father’s, but like his, it’s my most important accessory. Everything has its place, and I know exactly which pocket to search to find what I need. My stuff is pretty standard, pared down by trial and error to necessities. When I reorganize it and dump everything out onto the floor this is what I find: a phone charger, handheld comm, small kit with screws and washers, a rope in case I have to tow my airplane to the hangar (I use it at least once or twice a year), a multi-purpose wrench, Swiss Army knife, a stubby flathead and multi-head screwdriver, a ½” wrench for brakes, a small pair of dikes, electrical tape and clear tape, AA batteries for my Bose headset, a couple of spark plugs, carabiners for rental car keys, etc., and those amazing quick-release cable ties that I’m so enamored with. I carry some plastic slap-on shades for my canopy and ear plugs for when those noisy jet teams are flying. For emergencies, I carry a lighter, compass and EPIRB.

Sadly, I only carry one paper chart, a full U.S. planning map and no sectionals. One of the last holdouts among my friends, I finally canceled my subscription. I also carry Band-Aids, a small siphon for draining fuel before an airshow, a hose for smoke oil and a spare lipstick. For years, I carried a book, usually A Gift of Wings by Richard Bach, and a deck of cards, but now all of that can be magically summoned on my ever-present iPhone. When I fly in Africa or other remote places, I add a few things: a chamois for straining fuel, my Garmin 195, a SPOT device, Ziploc baggies (you never know when you’ll need these) and a little more survival gear.

I thought I’d ask a few friends what they put in their flight bags. Matt Champion, airshow pilot extraordinaire, said: “I travel pretty light. I don’t carry a real flight bag. I use a leather toiletry bag, and it’s amazing what fits. I’ve changed a cylinder on the road with the tools I can carry in it. I carry a set of wrenches, metric and standard, a long and short changeable screwdriver, safety wire, cotter pins, zip ties, nuts, washers, small bolts, brake bleed fitting, brake pads mounted, a couple of spark plugs. Then, of course, there’s the personal locator. I carry two small survival kits, a multi-purpose knife, and, of course, you can’t forget the Imodium AD, just in case.” Matt also always carries a liter of water and a protein bar.

James Wynbrandt, aviation writer, carries some interesting things. Like Matt, he doesn’t carry a flight bag, per se, but carries a backpack, and besides the regular stuff like AA batteries and a screwdriver, he always carries a copy of Pablo Neruda’s Twenty Love Poems and a Song of Despair, for, he says, “It can be opened at anytime for a moment of solace, inspiration and to brush up on Spanish-English translation.”

I asked Mike Kennedy, one of the stars of Airplane Repo, if he carried anything interesting because I’m sure he does, and he responded, “Because I’m ferrying airplanes all over the world that I’m unfamiliar with and I don’t know what’s going to work in the airplane or not, I generally carry a Garmin 796, an ICOM handheld radio, a Stratus 2 and my iPad loaded with ForeFlight and Jepp FD, and a Delorme inReach Satellite communicator. I also carry a Bose QC15 headset with a UFlyMike aviation microphone. It’s compact, lightweight, and has a good sound so I can use it for music or watching movies on the airlines on my way to pick up airplanes.”

Jackson Hole resident, physician and owner of Aeromedix, Brent Blue, says, “I generally carry peppermint or a bergamot mint/sweet orange/fingerroot combo for passenger nausea if for any reason our ReliefBand does not work.” Now, that’s a thoughtful guy to think of his passengers.

I asked one of our students, Scott Juneau, what he carries, “Mini EPIRB, mirror for flashing, Leatherman, batteries, fire starter, E6B, disposable camera (as a backup for hangar stuff), barf bags.” Barf bags are a good thing to carry, but I think I’ll have to refer him to Aeromedix to pick up some ReliefBands. Barfing is no fun.

And, finally, the Chief Instructor at our aerobatic school, Allan Moore, says, “I always carry a set of WAC charts, an LED headlight, a spare push-to-talk, an E6B computer, a plotter and a 0.5-liter water bottle. Also, granola bars, Eversharp pencils, a 6×8 notebook and hand warmers, the 02 type. Then there’s the multi-tool, foam ear plugs, small flashlight and two-foot finger grabber.”

We’ve got to carry our stuff in something. I love my MyGoFlight bag. It’s more like a backpack than the longer rectangular bags I’ve carried in the past, and it fits nicely into the front seat of the Extra I’m flying. I use quick-release cable ties to keep it secure, and off I go.

What do you carry in your flight bag? Do you put a lot of thought into it or just throw a few rags and a quart of oil in and go? Do you update it every year or leave the same old stuff in it? It’s good to take an inventory once in a while. Of course, what you need depends on what airplane you fly, what your mission is and where you fly geographically. For example, in Alaska, the flight bags differ a lot from the ones we use in the Lower 48. In Alaska, where most of the state is wilderness, you always have to think about “walking out” in case of a forced landing. This is the case in a lot of Western states, as well. I know I like to be prepared for everything.

My flight bag is as much a part of me as my ever-present backpack, only it’s much more organized. When I see my crew digging around for a part at an airshow, it’s usually something critical that we need “now,” but I know what I’ll be doing when I get back to the hangar. I have to know that everything is in its place. And, to avoid clutter, I follow the golden rule I learned from a women’s magazine: If you buy a new piece of clothing, you should get rid of one thing in your closet. And, if you haven’t worn something within a year, then you’ll never wear it, so get rid of it. I try to extend that kind of thinking to a lot of things, including my flight gear.

It’s a little nostalgic, but I miss those big and dignified airline pilot flight bags and Jepp charts. I used to love updating them and reading approach plates to exotic airports, but who really has time for that?

I called my good friend Andy Irwin, a captain for a major airline, and asked him what he carried in his flight bag. He said, “Flight bag? We don’t carry one anymore. I just have to carry an iPad and a flashlight.”

Sigh, how things have changed.