SocialFlight is launching a sweepstakes to win a ride in a Titan T-51D Mustang, to promote its video documentary following its construction of a Titan Aircraft T-51D Mustang.

The Titan Aircraft T-51D Mustang is a three-quarter scale replica of the North American P-51D Mustang. The all-metal aircraft has tandem seating for two, and is powered by a GM LS3 V8 Engine producing 310hp. 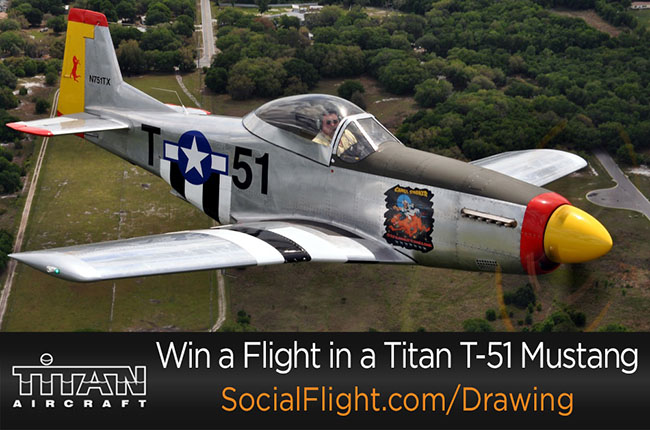 Jeff Simon, president of SocialFlight, has taken on the effort of building the aircraft to engage with pilots and aviation enthusiasts. It is also a family effort as Simon’s two sons have been assisting him, working on the build in their converted living/dining room, a press release from the organization said.

“SocialFlight’s T-51 Mustang build documentary is a fantastic, educational adventure that connects us with pilots and aviation enthusiasts from around the world,” Simon said in the release. “We were thrilled at the opportunity to give away an actual flight in this amazing aircraft. This is just the first of many prizes we plan to offer our viewers during the project.”

In addition to the ride in the aircraft, winners will also be given a personal tour of Titan Aircraft’s factory in Austinburg, Ohio with CEO John Williams and general manager Bill Koleno. The winner may also arrange the prize flight to take place at one of the many airshows Titan Aircraft attends.

The sweepstakes runs from April 10 through April 30, and entries are available online as well as in-person at SocialFlight’s partner companies at Sun ‘n Fun.