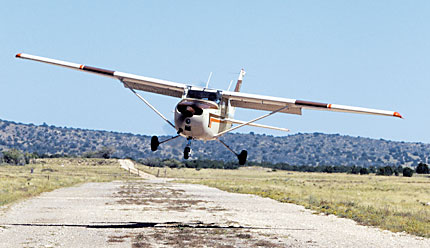 If you’ve ever been to a farm, you know that when one cow makes up his mind to blaze a trail to the feed trough, the other cows always follow. It doesn’t matter if there are obstacles along the route or the farmer hasn’t put corn into the hopper—cows blindly follow. They don’t use judgment, ask questions or learn from their mistakes. I call this the Moo syndrome. Pilots may be eons apart on the Darwinian scale from cows, but they, too, follow each other, disregarding the mistakes made by their predecessors. The outcome could very well be disastrous, but they still blindly follow.

Take the case of hand-propping pilots. Pilot number one hand-propped the engine by himself when his battery went dead. He tied the tail with an old rotted rope, which parted once the engine came to life. In his effort to jump in and save the day, he missed the step and the horizontal stabilizer struck him to the ground. The airplane did an expensive dance on the ramp, hitting three airplanes and a light pole. The FBO was vindicated by saying it never provided tiedowns and that the rope must have been an old leftover. Pilot number two, not to be undone, also tried a solo hand-propping exercise. This time, the airplane took off with him hanging desperately onto the strut, just missing the fuel farm and the credit-card machine. The airplane finally shook him off and targeted two parked airplanes and two chain-linked fences before stopping.

Pilot number three most likely never read any of the accident reports or the FAA regulation that requires two people to be on hand for a hand-propping exercise. This commercial pilot valiantly exhibited the Moo syndrome in January 2005 by single-handedly hand-propping a Cessna 172 with the tail tied down with a good rope. Unfortunately, he had to untie the tail with nobody in the airplane, and when he attempted to climb into the cockpit, he fell and reached forward, pushing the throttle full speed ahead. Luckily for this pilot, he managed to drag himself on board and regain control, avoiding parked airplanes and only damaging his own plane by smashing into a fence. What does the regulation say? One person must be the proppee and the other an airplane-savvy person in the airplane with feet on the brakes. To hedge against pilots blindly heading to the accident barn, the FAA says it would be a good idea to chock the airplane as well.

Pilots do stupid things. One pilot couldn’t defog the windshield, but took off anyway. During the takeoff roll, he concentrated on keeping the airplane “straight,” but didn’t detect that his ground track wasn’t parallel to the runway. When the windshield finally cleared up, he was looking straight at a fence, so he applied aft elevator control to clear the obstacle. The airplane crashed into the fence, then came to rest upright. How can a pilot blindly try to fly when he or she’s unable to see out the front window? Another pilot, with his head up and locked, grew impatient waiting for a heavy rainstorm to move away from the airport. When the first glimmer of a hole appeared, he launched. During the takeoff roll, the wind increased, the rain fell harder, and the pilot struggled to maintain directional control. The takeoff was eventually aborted, but the airplane overran the runway and struck a fence beyond the departure end. The weather reported at the airport included winds from 300 degrees at 17 knots, gusting to 27 knots. How anxious was this pilot to get to the accident barn? When it’s black to the west and a sucker hole forms, don’t be that sucker, even if the other pilots go, or you may end up in the accident barn.

Pilots’ egos also embrace the Moo syndrome. “Get-home-itis,” being a top gun or thinking weather can’t kill you are common traps we could die from. On November 14, 2004, a Cessna 152 was destroyed when it impacted trees and terrain while maneuvering near Lyons, Colo. Luckily the “Die? Who, me?” commercial pilot and passenger weren’t injured. This egotistical instructor took his student to a practice area above a cloud deck. Conditions were IFR, but no flight plan was filed.

On the descent through the clouds, they “ran into trees.” The ceiling was 600 feet, the visibility was three miles, and the temperature dew point was 1/-1. Anyone who thinks he or she can fly IFR without a clearance and descend without being on an approach definitely is destined for the accident barn.

On the other hand, just being thirsty at the wrong time got a pilot into a fender bender. Forgetting to set the parking brake, the student pilot, who had just completed his run-up, decided to get his water bottle from behind the seat. In doing so, his feet slipped off the brakes and he rear-ended the airplane waiting for takeoff ahead of him. How many of us pilots who are in a rush don’t set the parking brake during a run-up? Maybe we should all take heed and not become a statistic that repeats itself.

The most recent top-gun accident happened as 11 marines, packed into an Army Black Hawk helicopter in eastern Afghanistan, asked for an exciting flight on an otherwise dull mission by demonstrating for visiting dignitaries how troops are sped into battle. “Fly hard,” requested the marines. Climbing and swooping, the Black Hawk pilot crested a 400-foot hill, then deliberately nosed into a dive so steep and abrupt that everyone inside felt weightless. A wheel chock rose off the floor like a magician’s prop and flew forward into the cockpit, jamming the controls. In the horrific, tumbling crash that followed, a crew chief in the doorway died. Everyone else was injured. The $6 million helicopter was destroyed. Have we seen this scenario before…treetop maneuvers over a friend’s backyard cookout ending in a crash or buzzing the beach with the resultant airplane buried in the sand? Most people on the ground don’t even know who you are—or don’t care—so why give them an air show that could end up as a crash story?

One of the most devastating accidents occurred in 1959 when a Bonanza crashed and killed Ritchie Valens, Buddy Holly and the Big Bopper near Mason City, Iowa. The accident was caused by icing and the the pilot decision to fly into deteriorating weather when he wasn’t instrument-rated. Three idols in the early days of rock-and-roll died because of get-home-itis, the “complete the mission” syndrome or plain stupidity. Since that date, more pilots have died exhibiting this type of Moo syndrome than those who have had engine failures. How come we pilots don’t learn from these highly publicized aviation mistakes?

No matter how much training we endure or how many flight hours we log, something affects our thinking process that puts the possibility of crashing an airplane into the other guy’s barnyard out of our mind. It can’t happen to us, we say. Oh, but it can. As mentioned in the video Human Factors and Pilot Error, fatigue is a big contributor to dulling our awareness toward danger. Being tired isn’t just a function of lack of sleep, but it also may be exacerbated by low blood sugar because of hunger or a poor diet. Candy bars can be an immediate fix for a few minutes, but this glycemic high is short-lived, and the resulting downswing could leave your brain vulnerable to poor decisions and inattention—not a good thing when the weather is down and dirty. Dehydration also can affect the brain’s performance, so it’s imperative that you drink not only lots of water, but also liquids with added electrolytes to keep those brain cells firing and active. Chemical fumes that abound at airports affect our thinking power. Carbon monoxide is well-known as a lethal unseen hazard. Not so lethal are the residual effects from fuel vapors, cleaning products and even the jacket you picked up from the dry cleaners (formaldehyde-based solvents used in the process affect your brain). Although these types of hazards may not directly kill you, they can affect your thought processes, which can lead to an accident.

Stress, anxiety or passenger pressure also can influence our ability to make correct decisions. In the cases of the fogged windshield and the pilot who tried a takeoff into adverse weather mentioned earlier, it may have been that someone in the airplane was pushing them to go. Can we say no? Absolutely! The bravest pilot is one who is able to voice his or her fears and reservations about a flight and stand behind the probability of aborting the ride if necessary. This type of wise pilot doesn’t have to follow the other “cows” to the accident barn.