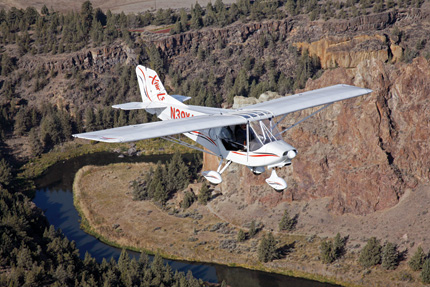 In the world of canines, as in the world of S-LSA, there are so many choices. Greyhound: sleek, beautiful, speedy. Australian sheepdog: smart and agile. Cocker spaniel: affable, frisky, great lap doggies. And then there’s the lovable mutt, that unique creature of indeterminate pedigree that plays when you want to play, goes where you want to go and never complains. The X-Air LS (www.x-airlsa.com) is that kind of lovable creature.

Sure, at 113 mph (98 knots), the aircraft is no greyhound. The ultralight-style, kinda boxy, sailcloth-envelope-covered airframe won’t garner it “Best in Show” honors, nor will its docile handling dazzle you with nimble sheepdog moves. But it will happily jump up for a Frisbee at a better than 800 fpm climb rate.

For flight schools, students and pilots interested in a dependable trainer or local-recreation S-LSA—one that’s easy and fun to fly, low-maintenance in its care and feeding, and never pretends to be more than what it is—the X-Air LS is a solid, affordable airplane that’s up for adoption.

Speaking Of Pedigrees…
On the flight line and in the air, the X-Air LS unabashedly wags its tube-and-fabric tail. For the uninitiated, these are the tangible benefits of this kind of construction:
1. Lightweight: The X-Air LS has a 660-pound empty weight and a 484-pound full-fuel payload.
2. Low cost: At $59,995, it’s half the price of high-end LSA ($125,000 and up).
3. Low repair and maintenance costs: Bend or break a tube? Bolt or rivet in another one. Tear the covering? Fabric repair or replacement is quick and inexpensive ($4,500 for an entire set of envelopes, plus a couple days of labor). Compare that to re-covering with doped fabric, aluminum skin or composite/carbon-fiber surfaces.
4. Foldable wings: These increase the storage possibilities.Yet the X-Air LS isn’t an ultralight: It’s an honest, capable LSA that offers a viable and durable alternative to the $100,000 LSA club. 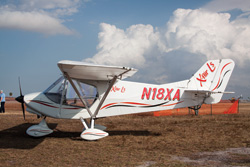 AKA The Sleeper
Just before I shared its 43-inch-wide cockpit with X-Air General Manager Matt Verdieck at January’s Sebring U.S. Sport Aviation Expo, my preconceptions about the X-Air were deconstructed.

I built and flew many ultralight aircraft in the 1980s. I’m well aware that 254-pound, tube-and-fabric aircraft get bounced around like ping-pong balls in strong winds. And since Sebring’s weather was windy every day, I had assumed the X-Air LS would be one airplane that stayed on leash most of the time—I couldn’t have been more wrong.

Due to prevalent gusty conditions, demo flight ops for most aircraft were sharply curtailed—except for the X-Air LS. Routinely, when no one else was flying, I’d hear the snarl of an engine at climb-out revs, and look up to see Verdieck taking another demo passenger for a spin. If he meant to dispel any prejudice against the airworthiness of tube-and-fabric construction airplanes, he couldn’t have seized a better opportunity.

A Run In The Park
Climbing into the efficient, neatly organized cockpit evokes bare-bones flying machines, but the nicely finished interior serves up everything needed for the recreational or student flyer. The seat comfortably fits your shape. Dual sticks and throttle support the training mission. Toe brakes (right side is an option) and rudder-pedal-to-nosewheel linkage make for easy ground handling.
Advertisement

X-Air has a roomy and airy feel, thanks to overhead “greenhouse” window panes. Outside visibility is excellent, especially out the top in a high-bank turn, which is helpful for spotting traffic and when working the pattern.

Operating the 85 hp, air-cooled, four-can/four-stroke (horizontally opposed) Jabiru 2200 is a snap. No mixture, just choke it if cold and turn the key.

Ground roll is short, well under 300 feet after notching in—with the overhead flap handle—a 10-degree takeoff setting. You need either slight nose-up trim or a little tug on the stick to lift the nosewheel and get moving skyward. Rotation comes in at around 45 mph (39 knots, but these folks use mph, so I will too).

Climbing out at bumpy Sebring proved no more challenging than in the other LSA I flew there. It handles like any three-axis airplane, with good response and solid feedback. And you don’t need to ride rudder hard on takeoff—a light right foot keeps it honest. Up we climbed, indicating around 650 fpm. Verdieck said the VSI was calibrated 100 fpm low, so initial climb with full fuel (15 gallons) and around 400 pounds of pilotage likely was more than 750 fpm (book is 825). What a frisky pup!

Corrections for turbulence were nominal, within the realm of S-LSA flight as I’ve experienced it—not a ping-pong ball ride at all. The X-Air isn’t a rudder airplane like a Cub, but it does like you to lead with your foot a bit into turns. Establish bank, center up—then it lopes around the circle steady as you please. Roll forces are firm but not stiff or “trucky.”

Flaps up and pitching for 60 mph gave a good rate of climb. Closer to 50 mph, especially in a strong wind, brings dramatic nose-up deck angles familiar to all ’80s ultralight pilots worth their bellbottoms and ponytails.

The wing has slight dihedral for roll stability. There’s also wing twist, which gives the tips a lower angle of attack. The idea is to keep the tips flying after the wing root has begun to stall (stalls typically progress outward from the root). That minimizes falling off on a wing if you get a stall break—an excellent personality trait for a training airplane.

Pitch is reasonably sensitive but not twitchy. I toured the South Florida landscape, dodging cloud shadows, with a thumb and one or two fingers on the stick. At modest cruise settings, around 2,800 rpm, I saw 90 mph, but Verdieck expects higher numbers with the right prop.

Standing on a wing while orbiting around an orange grove was a pinwheel experience. I easily could hold a ground point right below the tip—or above, by looking through the overhead windows. Comfortable, sufficiently nimble, with plenty of force feedback: everything you want in a trainer or fun-flying pup.

Rudder input initially is light, but once you roll into a turn, the pedal stiffens up a bit, matching speed and stick forces nicely. Roll rates are reasonable, if not breathtaking. I did reversals left to right and back, then a few Dutch rolls, and though I lacked precision, I could sense it wouldn’t take long to master the air work. The X-Air LS is solid, predictable and fun to fly.

Approach and departure stalls share one characteristic: They’re uneventful. You have to work to get the wing to break. As with most LSA, simply relax the stick, and it happily recovers. My arm got tired holding the stick all the way aft, trying to get a departure-stall break. It hung on the prop at a nose-high angle; I kept wings level with a little rudder dancing, and the airplane gave plenty of warning buffet. It did tend to wander around a bit in yaw at the stall…but I consider that just another warning indicator. Indeed, you’d have to be truly panicked to hard-stall this doggie.

Landings are a cinch, but remember that (like all LSA) the X-Air is lightweight. Since it’s a slower cruiser, don’t put in flaps early in GA airport environments, or you’ll have Wichita tin running up your backside.

After turning base, I notched in 10 degrees of flaps at around 65 mph, then went to full idle, put in 20 degrees of flaps and pitched back to 55 mph. With the strong crosswind and very short LSA strip (X-Air’s landing roll is only 230 feet), we crossed the threshold at 50 mph and a few feet up. I pulled back a might too firmly on flare, and it quit flying all at once, dropping less smoothly onto the mains than I had expected.

“Heavier airplane pilots,” said Verdieck afterward, “are used to more inertia to work with during flare. It’s light, so it runs out of energy pretty quickly.”

Adding Up The Bennies
The X-Air LS is an honest and well-built little fellow with docile handling and excellent short-field potential (takeoff roll is 265 feet). It also is an airplane that teaches good rudder habits. Earn your license in one for around $3,500; rent it for $65 wet and play around at 2,500 rpm all day at 2.5 gph. You’ll be hard-pressed to beat its economy and friendly-puppy personality.