One of the many great things about AirVenture is that you can just show up and amazing events and opportunities fall into your lap. For maximum value, however, we’d advise that you plan a few special activities. If you’re an active pilot, here’s Number One on our list.

For pilots who might a bit rusty with their VFR skills and for those who want to brush up on their instrument proficiency, there’s one destination that is a must: the EAA Pilot Proficiency Center. 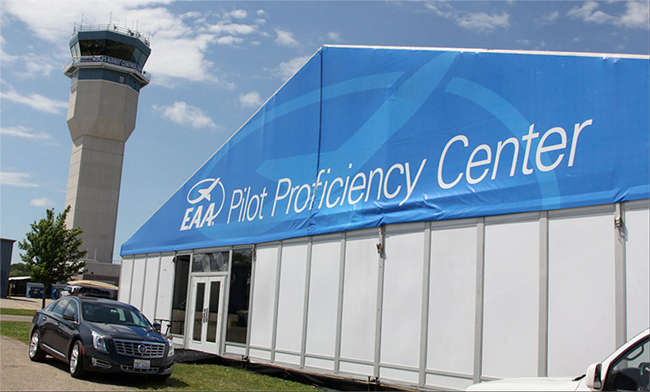 The PPC has been growing since its first year at Oshkosh several years back when it started as a meeting place, sponsored by Hartzell Propeller and its proficiency-focused president Joe Brown. That first year, the idea was to give instrument pilots a forum to discuss instrument procedures using the IMC Club’s group discussion process to make that happen. I was there that first year, and it was a blast. The level of engagement was sky high, with attendees, myself included, often coming back for multiple sessions over the week-long run.

After that, it was clear that the idea had traction, and indeed, it just kept growing. Early on, Redbird Flight Simulations got involved in the event, providing sims and scenarios that pilots could fly right there on site under the direct tutelage of a CFI. VFR scenarios quickly got added to the mix, so pilots could test their skills at either visual or instrument challenges, and other features were added, including incredibly popular talks on weather analysis and chart reading.

Soon, the EAA, realizing what a great opportunity the proficiency center was for advancing its core mission of improving GA safety, got into the game and became the lead sponsor, putting its remarkable resources behind the initiative, which today is known as the EAA Pilot Proficiency Center.

This the second consecutive year that Plane & Pilot has been a sponsor of the Center, which is the easiest call in the world for us, since the PPC advances several of our core missions, as well, chiefly, as encouraging pilots to actively evaluate and improve their proficiency at exactly the kinds of skills that are most difficult to teach in the actual airplane. Again, thanks go out to Redbird for its continuing support of the project.

Look for continuing coverage of the Center’s innovative technologies in coming stories on planeandpilotmag.com.