At the Sun ‘n Fun Fly-In in early April, it was like old times. I climbed into a Grumman Tiger, just like one I flew as my regular ride some 20 years ago (and loved a lot). But this wasn’t that Tiger. This particular bird was the best-equipped Grumman Tiger in the world. Ever.

The plane was, of course, Garmin International’s factory avionics testbed and demonstrator, and it was decked out with the latest from Garmin, along with some cool stuff from last season and even before. And it was all lit up and working happily together. If there hadn’t been 40 rows of airplanes and T-shirt tents and golf carts between us and the runway, we could have gone flying right there. That is, after all, how it got there.

The Tiger is one of hundreds of planes in which an owner can install the new hardware, and when I say “new,” I really mean newly approved for use in certificated Part 23 Class 1 and Class 2 light airplanes under 6,000 pounds. You can’t put it in your King Air, nor was it intended for such planes. What you can do is put it in your Cessna 172 or older Cirrus SR22, or your 1973 Piper Warrior. It’s designed to transform these older airplanes into modern marvels, well, at least electronic marvels. And with good avionics, planes become far more useful.

The work is the next phase in Garmin’s drive to create a whole lineup of Experimental to Certified (E2C) avionics that the FAA has in its much-appreciated wisdom seen fit to allow into the cockpits of old planes to replace the creaky analog gauges, something I’ve been urging the agency to do for 20 years now. Last year, Garmin shook the old school foundations with the introduction of its G5 standalone instrument that could be a really cool multifunction attitude indicator or HSI. At less than $2500 for one of the units, an owner of a 172 (or hundreds of other planes) could get cutting edge hardware in the panel for what it would cost them to replace the existing hardware in many cases. In many cases, the G5 is a lot less than that.

The company followed up on that success with the introduction of the GFC 500 retrofit autopilot, which we flew and reviewed last year. With a GFC 500 hooked up to a G5 or two, you could transform a steam gauged bird into a digital IFR cruiser, so long as you could, and this was the rub, pair it with a WAAS navigator. If you happened to have a GNS 430W in the panel (or some comparable model) then you were set. If not, then you needed to get one, and the new ones were $12,000 and up before installation, and used 430W and 530W navigators were fetching a pretty penny on eBay. They still are, though their market just shrunk appreciably.

The genesis of this new host of displays and navigators was Garmin’s work developing G3X Touch avionics for homebuilt airplanes. The gear has been out for several years, and I’ve flown it in several LSAs. It’s amazing stuff, and the price point was great. It kind of had to be if Garmin was going to sell it to homebuilders, almost all of whom are trying to keep their costs down. But the truth is, G3X Touch was developed from Garmin’s existing avionics for certified planes but using fewer methods than required under Part 23. So it’s the best of all worlds.

So, yes, the new gear looks and feels very much like Garmin’s existing industry-leading products like its Garmin G1000Nxi suite, except that in some ways, it’s cooler. It’s got touch control, for one, cool symbology developed to be easy to see and use. This is especially true with the new touchscreen navigators—you’ll see— which are small enough that a really smart UX, the industry term for what we used to call :”user interface,“ was critical.

The introductions were really three or four blockbusters, depending on how you count. But the big needs, the critical needs, being met are three or four (depending, again on how you count) capabilities that are either required by law (guess which one that is) or have become so common that pilots “need” them in their planes. These include ADS-B, of course, which we’ll all need in our planes in a few months, moving map, satellite-based point-to-point navigation, and solid state attitude systems. Depending on how an owner tailors the system for their plane, they can get all of these things in different ways, so while none of this is free, the price point is revolutionarily low, and the retrofit capabilities are unprecedented in this class of airplane.

Panels: G3X Touch for Single-Engine Airplanes: The G3X Touch for certified planes comes in two sizes. Unlike on the G1000, in which you have two separate displays, one for the PFD and one for the MFD, with G3X Touch, you get one big PFD with MFD features smartly arrayed around it, just like G500. G3X Touch is super customizable, too, something the FAA swore it would never let happen when the first light GA flat panels were coming around. The way Garmin has done it today is, surprise, surprise, smart and easy to use.

G3X Touch has interfaces for nav and communications radios, active traffic, engine instrumentation, full PFD display with synthetic vision, an inset smart-moving map, FMS inset and more. The product comes in two versions, the 10.6-inch model ($9,995), which is about the same size as one G1000 display, or the more compact 7-inch version ($7,995). The system can interface with a variety of other Garmin products, including the G5 standalone instruments (HSI and attitude), the G500 retrofit autopilot and the new ADS-B transponders, detailed below. Deliveries were scheduled to start in April.

New ADS-B Navigators: GPS 175 and GPS 375: For years, the cost of an IFR navigator, which started at better than $7,000 for a used Garmin GNS 430 unit and was typically more like $15,000, has been a major stumbling block for owners looking to upgrade the panel of their modestly valued small plane. With the introduction of the GPS 175 and GPS 375, that has changed. At $4,995 for the GPS 175 and $7,995 for the GPS 375, these two new navigators are game changers, and not just for Garmin products. There are a lot of other products out there—well, not a lot, but a handful or more—that need a certificated IFR navigator to get the most value out of them. These are those.

The 175 is a standalone IFR navigator with a color touchscreen display and broadcasts ADS-B Out.  You don’t enter flight plan data, like airports or waypoints, with a concentric knob, as you do on most Garmin navigators, but by inputting them using an ingenious popup menu.

The 375 is slightly larger than the 175 and adds a host of features, including ADS-B In. Importantly, both products are the same width as a standard instrument, so no panel surgery should be necessary for their installation, though you might need to add a WAAS antenna if you don’t already have one installed. Of course, both work with the Garmin G5 standalone primary flight instruments, the G500 and G600 autopilots and existing Garmin Mode C or S transponders (remember, you still need one of those), among numerous other Garmin products.

These two navigators are the real game changers, as they get the cost of being able to fly IFR flight plans and LPV (and more) approaches down to $4,995, while also adding ADS-B Out, functions that would have cost around $20,000 or more previously.

So back to that Tiger. It has two G3X Touch displays, a 10.6-inch one and a 7-inch version mounted vertically. In addition, it has a G5 serving as the standby instrument, a second nav/comm, which is really convenient, not to mention a great backup; the GFC 500 autopilot; and the GMA 345 audio panel, all of which can work and play together through the interface of the G3X displays.

And all of it for around $30,000 retail, and that’s for this panel, which, most would agree, is probably overkill. Now, $30,000 is a lot, but if you’ve shopped for this kind of gear before, it’s really not, because what you get is everything you want, in the latest, most sophisticated digital form. Game changers without a doubt.

Look for a full flight report from Plane & Pilot soon, in which we’ll tell you how all this cool stuff works in action, as well as going into different options you might employ when it comes time to pull the trigger. 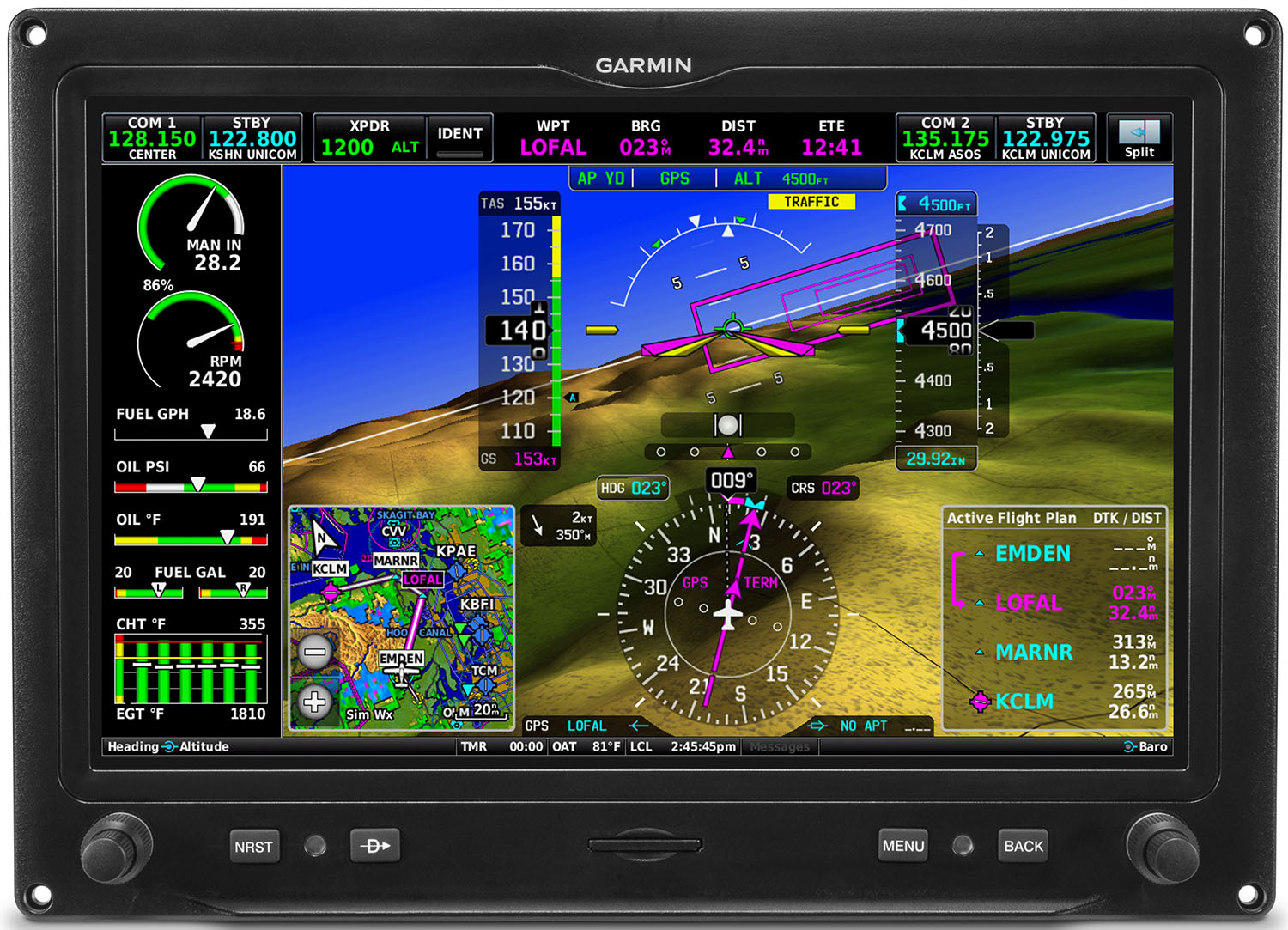 The Garmin G3X Touch for certified airplanes brings an unrivaled combination of value to owners of older small airplanes that would benefit from modern avionics, which is nearly all of them.